Wynk Rewind Is Now Live; A Look At India’s Favorite Music In 2022 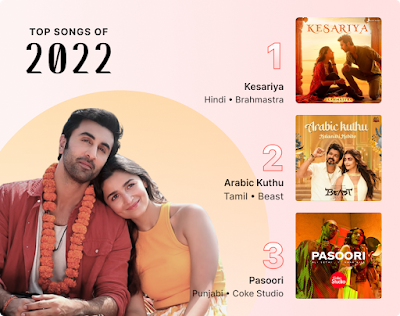 Wynk Music, India’s number 1 music streaming app by downloads and daily active users today introduced Wynk Rewind, a personalized user experience which features top artists, albums, songs, playlists, heard by the listeners during the year. In addition, Wynk also released its top lists for India and across the states highlighting top songs, albums, playlists, as well as most streamed artist on the platform.

Wynk Rewind, curated playlist will be integrated with social media platforms and easy to share with friends and family. The app will create over 100 million personalized lists customized to every listener who has streamed a minimum of 20 songs on Wynk in 2022.

Speaking on the launch of Wynk Rewind, Adarsh Nair, CEO – Airtel Digital said, “We are delighted to introduce Wynk Rewind to our customers. As one of India’s leading music streaming platforms we have had a ring side view of what India is listening to. With Rewind, we have captured the mood of the listeners at various time in the year and brought user insights together to encourage transparency for the artists who now know, where their songs were played and the journey of their top songs. Wynk is committed to leverage technology to enable independent and regional music artists across languages to showcase their music to India and the World.

Songs made by independent artists on the platform – 515

Average hours spent on the platform per month – 110 with a daily average of 3.8 hours

In 2022, Wynk launched ‘Wynk Studio’, India’s largest music distribution ecosystem for independent artists. The studio has signed up more than 300 artists on the platform from India, Singapore and the US with over 500 published songs. Music created by these independent artists is getting recognized with Pratik Gandhi’s “Mashoor Banegi” featuring amongst Top 200 songs streamed on Wynk in 2022.

Posted by editor-manu-sharma at 6:34 PM