Panasonic P51 to create a dent among smart phones in India 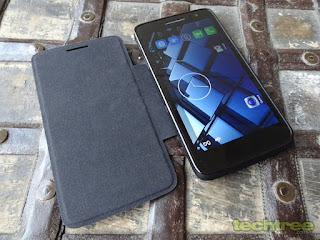 Panasonic launched its first smartphone in India, the P51, earlier today and it’s certainly a very interesting addition to the Indian market. Priced at Rs 26,990, the P51 will face some really tough competition from the likes of Micromax and Karbonn, not to mention market leaders Samsung and fellow Japanese electronics giant Sony. Obviously, the P51 has to bring the right set of specs to the battle – and it does so to a large extent. Let’s take a look a closer look at the specifications of the P51.

OS – Stock Android 4.2 Jelly Bean
The Panasonic P51 stands out among a sea of TouchWiz and Sense-running smartphones thanks to the stock Android 4.2 roots. The company has also included the on-screen navigation buttons just like Google intended. And overall, we are pretty chuffed about seeing stock Android on a smartphone. It makes a whole lot of difference in the user experience when bloatware or badly-designed skins don’t hog your RAM resources. There are minor customisations in the interface, but nothing too drastic.

Cellular connectivity – Dual-SIM, 3G and 2G
Just like most phones launched in India these days, the P51 goes the dual-SIM route. However, only one SIM can be used for a 3G connection, while the other can be used to surf the internet on EDGE.

Display – 5-inch 720p display
We would have been really disappointed if the first ever Panasonic smartphone for India would have launched with WVGA resolution display. Mercifully, there’s a 720p 5-inch display on the P51 and the resulting pixel density of around 294 ppi sounds really good even in this age of 1080p displays. The display is of the IPS variety, so colours should be well-balanced and still look punchy enough; however, Super AMOLED fans will miss the really deep blacks. The screen of the phone is made of Asahi Dragontail glass and has an Oleophobic coating to prevent fingerprint smudges.

Form factor – Unibody design
While at first look the P51 looks plain as can be, the unibody construction makes a great impression when looking at the overall design. The matte black back panel looks great and should keep fingerprints to a minimum, but the glossy white back is totally opposite. The 8 megapixel camera sits smack in the middle of the back with an LED flash underneath, while a loudspeaker grille occupies a left-of-the-centre spot towards the bottom. The right edge of the phone has the volume rocker and the microSD card slot. The power button is at top along with the 3.5 mm audio jack, while the left edge of the phone has the dual SIM slots and the microUSB out.

Wi-Fi – Nothing out of the ordinary
The P51 plays nicely with Wi-Fi 802.11 b/g/n standards, which seems slightly lacking when seeing more and more phones are supporting 'ac' and 'a' standards. As is usual for an Android phone, you can use the phone as a Wi-Fi hotspot.

SoC– MediaTek MT6589 (quad-core)
The P51 will not be found lacking for processing power. It features MediaTek’s MT6589 SoC, which contains a quad-core ARM Cortex-A7 CPU and PowerVR Series5XT GPU. While the CPU uses the slightly older architecture from ARM, the SoC is built using the newer 28nm fabrication process, so it should do well in terms of power efficiency. The four cores should easily help in gaming and even the general responsiveness of the UI. Another noteworthy feature is the inclusion of 1GB of RAM, which should put it on par with competition like the Micromax Canvas HD.

Storage – 4GB internal memory with microSD card slot
While 4GB of onboard storage seems rather disappointing, the presence of the microSD card slot make up for it. The slot can take cards up to 32GB in capacity.

Cameras – 8MP sensor with LED flash and 1.3-megapixel front-facing camera
The primary camera is an 8 megapixel shooter like the Micromax Canvas HD and the Karbonn Titanium S5. The camera is of the autofocus variety and there’s an LED flash as previously mentioned. Sadly, there’s no mention of it being a BSI sensor like the one on the XOLO A800. Still, we’ll have to wait and see how good the real-world performance of the camera on the P51 is.

The 1.3 megapixel front-facing camera might not be able to hold a candle to the 2 megapixel and even 5 megapixel ones we are seeing nowadays, but it should still be good enough for basic video calls and the occasional self-portrait.

GPS and miscellaneous
The P51 has the usual collection of sensors, but a gyroscope is missing. There’s Bluetooth 4.0 for wireless audio playback and for interfacing with other devices. P51 has good ol' GPS while GLONASS is missing from the picture. We guess including that piece of hardware would have driven the cost up further.

Battery – Li-Ion 2500 mAh
The battery capacity of the P51 drew a smile on our faces. With a capacious 2500 mAh battery, the P51 should easily last the whole day, unless you go overboard with the usage. The quad-core CPU in the P51 and the 720p display will be the real power hogs, but battery life should still prove to be peaceful.

The bottom line
There’s no doubt that the P51 is a very attractive smartphone both in terms of looks and design; however, if there is one sore point for the phone, it’s the price. At Rs 26,990, the phone is priced miles ahead of similarly-spec'd Micromax Canvas HD, Xolo Q800 or the Titanium S5. Expect a quick drop in the price of the phone soon after it hits stores next week. If that doesn’t happen, then Panasonic could have a flop on its hand with the first foray into India. In other aspects, the P51 seems very appealing and could be a worthy competitor to the Indian-made smartphones.

Source: T2
Posted by editor-manu-sharma at 7:18 PM No comments: