IMDb Announces Most Popular Indian Movies And Web Series of 2022 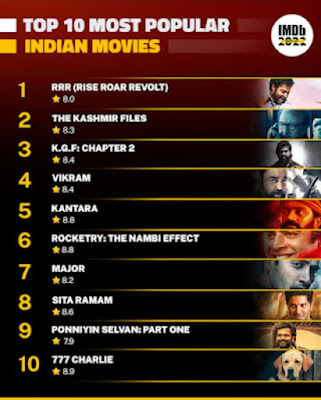 * RRR is declared the year's Most Popular Movie, and Panchayat is the Most Popular Web Series of 2022, as determined by the page views of IMDb users worldwide

*Of all the movies released theatrically or digitally in India between January 1 and November 7, 2022, and have an average IMDb user rating of 7 or higher with at least 25,000 votes, these 10 titles were consistently the most popular with IMDb users, as determined by the actual page views of the more than 200 million monthly visitors to IMDb worldwide. This exclusive and definitive data is derived from IMDb movie rankings, which are updated weekly throughout the year. IMDb customers can add these and other titles to their IMDb Watchlist.

*Of all the web series released in India between January 1 and November 7, 2022, and have an average IMDb user rating of 7 or higher with at least 10,000 votes, these 10 titles were consistently the most popular with IMDb users, as determined by the actual page views of the more than 200 million monthly visitors to IMDb worldwide. This exclusive and definitive data is derived from IMDb TV rankings, which are updated weekly throughout the year. IMDb customers can add these and other titles to their IMDb Watchlist.

·       Rocketry: The Nambi Effect and Major are two biopics that made the IMDb list of Most Popular Indian Movies of 2022.

·       Aishwarya Rai Bachchan and Kamal Haasan returned to films after five-year breaks, and were featured in two of the Most Popular Movies of 2022,  Ponniyin Selvan: Part One and Vikram.

·       The Most Popular Indian Web Series of 2022 list has representation from six subscription-based platforms, with one show each from Prime Video, Netflix, Disney+ Hotstar, Voot, and Zee5, and three from SonyLIV, pointing to the wide array of choices that customers enjoy in the streaming subscription space.

·       Beyond subscription-based content, two series from the list—NCR Days and Campus Diaries—are available to watch for free on AVOD platforms YouTube and MX Player, respectively.

“Entertainment fans from across the globe rely on IMDb to discover and decide what to watch, and it’s wonderful to see such a diverse list of Indian films resonating with audiences this year, ” said Yaminie Patodia, head of IMDb India. “Titles from various film industries are being released nationwide, in multiple languages, and being made available to a larger set of global audiences through streaming services, which is leading to increased fandom for domestic content. On the web series front, our Most Popular list points to an interesting time in the streaming space with titles available from almost all leading subscription platforms. Given India’s unique demographic mix and demand for ad-supported, free content, we also see shows available for free featured on this year’s list.”

Speaking on RRR being the IMDb Most Popular Indian Film of 2022, filmmaker S.S. Rajamouli said, “RRR is a tale of friendship which everyone can relate to, told in a style that’s inspired by ancient Indian storytelling and is a film I hold very close to my heart. I am grateful to IMDb for the honour and would like to thank viewers worldwide for their love and appreciation. This celebration belongs to the entire cast & crew who worked relentlessly to create the magic viewers witnessed on screen”.

Manish Menghani, director content licensing, Prime Video, India said, “We are absolutely thrilled that the Amazon Original series Panchayat continues to charm audiences in its second season. Audiences today, appreciate local, rooted stories with relatable characters, and Panchayat transcends on-screen portrayals to strike an emotional chord with the viewers through the lens of a light-hearted comedy. We are thrilled to be ranked #1 on the IMDb Most Popular Indian Web Series of 2022 list, and would like to thank our fans and IMDb users who are deeply invested in the story and characters of the series. We cannot wait to see what the residents of Phulera will do next.”

Speaking exclusively with IMDb, Arunabh Kumar, founder of original content creators The Viral Fever (TVF), shared: "I feel humbled and reassured at the same time that multiple shows from TVF have made it to the list. For us, the goal has always been to innovate and be honest with our storytelling. And time and again, we have seen that our audience loves us for that. We will continue to tell great stories in the same spirit. My gratitude and thanks to IMDb for making it easy to discover and learn about movies, TV shows, and web series; and for always supporting creators".

The IMDb Best of 2022 section features a variety of additional year-end Top 10 lists as well as retrospective photo galleries, trailers, original videos (including an upcoming In Memoriam video), and other coverage at https://www.imdb.com/best-of.

IMDb is the world's most popular and authoritative source for information on movies, TV shows, and celebrities. Products and services to help fans decide what to watch and where to watch it include: the IMDb website for desktop and mobile devices; apps for iOS and Android; and IMDb X-Ray on Fire TV devices. IMDb also offers a free streaming channel, IMDb TV, and produces IMDb original video series. For entertainment industry professionals, IMDb provides IMDbPro and Box Office Mojo. IMDb is an Amazon company. For more information, visit https://www.imdb.com/press and follow @IMDb_in.

Posted by editor-manu-sharma at 2:35 PM