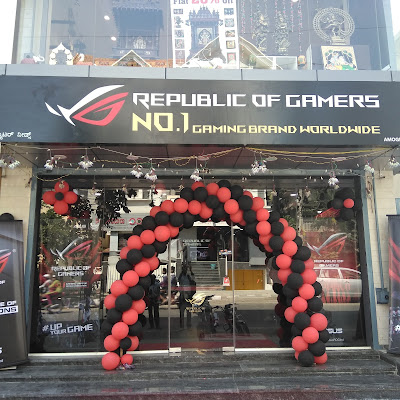 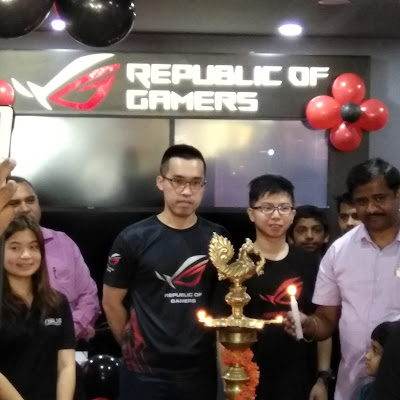 Asus’s  has launched their flagship store in Bangalore, India in a partnership with ‘Amogha Computer Needs’. Republic Of Gamers, India’s leading gaming brand has already opened two other stores in Kolkata and Bhubaneshwar and the Bangalore store is their largest one yet, with an area of 800 square feet. The store will also hold a gaming tournament for students on February 11-12, 2017. The store is equipped with a ‘Battle Ground’ where a total of 10 gamers can compete with each other. What's unique about this store is that you will not only be able to purchase high-end gaming hardware and accessories but you will actually get hands-on experience of the device as well.

So if you are a gamer then you can visit the store to experience the latest devices, game titles, and accessories that the company is offering. You can also purchase different PCs and accessories from the store after experience it. Arnold Su, National Sales Manager (ASUS India) who was present during the opening of the store stated, "Since Bangalore is the IT hub of India, it is one of the important destinations for ASUS and we have decided to launch our store in the region."

Su further added, "The key motive of the store is to encourage local gamers to have a dynamic experience and witness the true power of Republic Of Gamers." "We won't charge anyone for gaming on our systems." ASUS now has a total of three stores in India. And in the coming days, it looks like the company is aiming to introduce more stores across major Indian cities such as Delhi, Mumbai, and others. Besides, Su highlighted that "In India, the gaming scene including gaming laptops and desktops has been growing by 30 per cent year-on-year." While the situation is improving, ASUS India is also planning to capture 50 percent share of the gaming laptops market in India this year.


Also, the store is hosting a gaming tournament this February 11 and 12. So if you are in Bangalore and interested, you can head over to the store and try your luck at winning some exciting prizes. Asus ROG Will organise Counter Strike: Global Offensive gaming tournament at the new store. The store in is 33rd Cross, Jayanagar 4th T Block and the prize to be won amounts to Rs 1,40,000. About 300 team of students from 16-25 years are expected to take part and official indicate 5-6 such tournaments to be held each quarter.
Posted by editor-manu-sharma at 9:18 PM No comments: 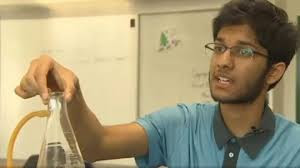 An Indian-American student has found a cheaper and easier method to turn salt water into drinkable fresh water and his research has caught the attention of major technology firms and universities. Chaitanya Karamchedu from Portland, Oregon, is turning heads across the country all because of a science experiment that began in his high school classroom.

The Jesuit High School Senior told KPTV that he has big plans of changing the world. “1in8peopledonothaveaccess to clean water, it’ sacrying issue that needs to be addressed,” said Karamchedu.

He made up his mind to address the matter himself. “The best access for water is the sea, so 70% of the planet is covered in water and almost all of that is the ocean, but the problem is that’s salt water,” said Karamchedu. Isolating drinkable water from the ocean in a cost effective way is a problem that has stumped scientists for years. “Scientists looked at desalination, but it’s all still in accessible top laces and it would cost too much to implement on a largescale,”Karamchedu said. Karamchedu figured it out, on his own, in a high school lab. “The real genesis of the idea was realising that sea water is not fully saturated with salt,” he was quoted as saying. By experimenting with a highly absorbent polymer, he discovered a cost effective way to remove salt from ocean water and turn it into freshwater. “It’s not bonding with water molecules, it’s bonding to the salt,” said Karamchedu.

“People have been looking at the problem from one view point, how do we break those bonds between salt and the water? Chai came in and thought about it from a completely different angle,” said Jesuit High School Biology Teacher Dr. Lara Shamieh. “People were concentrated on that 10% of water that’s bonded to the salt in the sea and no one looked at the 90% that was free. Chai just looked at it and said if 10% is bonded and 90% is free, then why are we so focused on this 10%, let’s ignore it and focus on the 90,” said Shamieh.

It is a breakthrough that is estimated to impact millions of lives if ever implemented on a mass scale. “What this is compared to current techniques, is that it’s cheap and accessible to everyone, everyone can use it,” said Shamieh. Scientists across the country are taking note. He won a USD 10,000 award from the US Agency for International Global Development at Intel’s International Science Fair and second place at MIT’s TechCon Conference where he won more money to continue his research. “They were very encouraging, they could see things into it that I couldn’t, because they’ve been working their whole lives on this,” said Karamchedu. 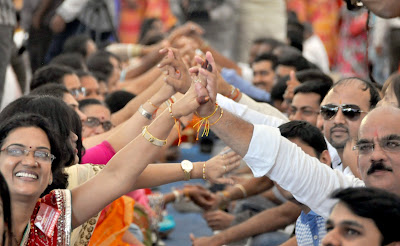 The explosion of mobile applications and adoption of mobile connectivity by end users is fueling the growth of 4G, soon to be followed by 5G growth. Cisco and other industry experts anticipate large-scale deployments of 5G infrastructures to begin by 2020. Mobile carriers will need the innovative speed, low latency, and dynamic provisioning capabilities that 5G networks are expected to deliver not just increasing subscriber demands, but also new services trends across mobile, residential, and business markets. Cisco forecasts that 5G will account for 1.5 percent of total mobile data traffic by 2021, and will generate 4.7 times more traffic than the average 4G connection and 10.7 times more traffic than the average 3G connection.
“With the proliferation of IoT, live mobile video, augmented and virtual reality applications, and more innovative experiences for consumer and business users alike, 5G technology will have significant relevance not just for mobility but rather for networking as a whole,” said Doug Webster, Vice President of Service Provider Marketing at Cisco. “As a result, broader and more extensive architectural transformations involving programmability and automation will also be needed to support the capabilities 5G enables, and to address not just today’s demands but also the extensive possibilities on the horizon.”
Sanjay Kaul, Managing Director, Service Provider Business, Cisco India and SAARC -
“As India leaps towards a digital economy, 2016 alone saw a huge growth in mobile traffic – by 76% from last year and, by 2021 consumer mobile traffic will grow 7.4-fold at a CAGR of 49% y-o-y. Much of this growth will be fueled by massive consumer adoption of smartphones, IoT, smart devices and use of machine-to-machine connections with an estimated 1,380 million mobile-connected devices by 2021. As the Internet of Everything gains momentum, we are clearly headed towards a new era in Internet communications, with M2M connections predicted to increase 17-fold at a CAGR of 76% y-o-y. The way we use connectivity in devices today will change businesses, government, healthcare, agriculture, manufacturing, retail, transportation and other key industries.”


The Cisco VNI Global Mobile Data Traffic Forecast (2016‑2021) relies upon independent analyst forecasts and real-world mobile data usage studies. Upon this foundation are layered Cisco's own estimates for mobile application adoption, minutes of use and transmission speeds. Key enablers such as mobile broadband speed and device computing power are also factored into Cisco mobile VNI projections and findings. A detailed methodology description is included in the complete report .
Posted by editor-manu-sharma at 8:17 PM No comments: 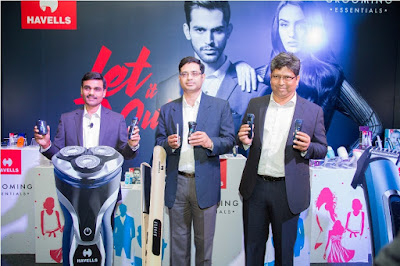 Havells India Limited, India’s leading Fast Moving Electrical Goods (FMEG) Company,has announced its foray into personal grooming segment with the launch of array of high quality personal care product like Electric Shavers, Beard Trimmers, Grooming kit - Precision nose and ear Trimmer, Hair Straighteners & Dryers,  Bikini Trimmer. The company also, for the first time in the country, launched baby hair clippers. These exclusively designed products will be available in the price range of Rs 1000- Rs 7200.
Speaking on the occasion, Anil Rai Gupta, Chairman and Managing Director, Havells India Limited, said, “We are extremely delighted to foray into personal grooming segment that offers enormous growth potential. At Havells, it has never been about maintaining status quo but to understand pulse of the discerning consumer, evolve, innovate, enter new categories with best in line products and establish leadership position while setting new benchmarks in industry excellence.”
India has more than 50% population below the age of 25 years and more than 65% below the age of 35 years. It is expected that the average age of an Indian will be 29 years by 2020, compared to 37 years for China and 48 years for Japan. With rising young population, more disposable income and increased focus on personal grooming amongst Indian youth in both urban and rural areas, the category is set to grow at a fast pace. The personal grooming segment in India is currently estimated at Rs 1,500 crore and is growing at a healthy rate of 25%-30% per annum. Developed around the evolving needs of the Indian consumers, Havells personal grooming range is a perfect blend of unique designs and latest technology that comes with hallmark features of Havells products- Style, Safety Durability and Convenience.
The products would initially be available in all major cities of the country and over 400 exclusive Havells Galaxies where consumers can touch and feel products. The entire range would be available across the country by end of March, 2017. Apart from this, the company would be selling products through online e-commerce platforms.
Saurabh Goel, Executive Vice President Havells India Limited said, "Personal grooming as a segment is experiencing swift and dynamic growth largely driven by an expanding middle class and an increased interest in personal grooming. We realized that despite our brand's strong recall and resonance among today's youth, we did not have any specific products for them. The launch of our wide range of contemporary and top quality products under the personal grooming segment will bridge this gap and strengthen our connect with young consumers who are key to this fast growing category."
He added, “Apart from our traditional channels we will also expand our network and reach out to cosmetics, departmental and pharma stores where consumers will be able to buy our latest range of grooming products”.
Posted by editor-manu-sharma at 8:14 PM 1 comment: