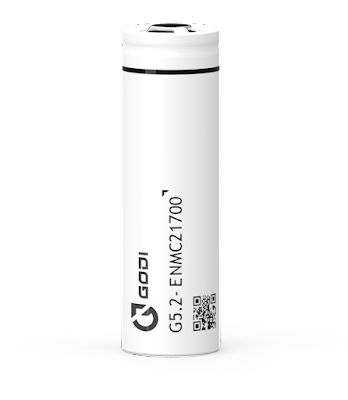 GODI India, the first Indian company to get BIS certification to sell lithium-ion cells made with home grown technology, has achieved another milestone by manufacturing India’s first ever 5.2 Ah 21700 cylindrical lithium-ion cells with an energy density of 275 Wh/kg based on silicon anode technology. The electrode composition has been indigenously developed as per the market requirement. With the use of silicon in the anode, an electric vehicle could achieve a greater range, up to 15-20% compared to graphite, on a single charge due to the increased energy density.

Aiming to solve the never-ending demand of commuters related to electric vehicle range anxiety, GODI India is making inroads in the manufacture of high energy density lithium-ion cells using Silicon, which is one of the most abundant elements on earth’s crest.

Commenting on this achievement, Mr. Mahesh Godi, Founder and CEO of GODI India said, “We are delighted to announce the manufacturing of 5.2 Ah lithium-ion cells at our Hyderabad facility. With the boom in EV sector constituting two, three and four wheelers in India and across the world, the need of high energy cells have become very essential. We have already delivered 5.0Ah cells to top six OEMs in India and planning to deliver 5.2Ah cells in the near future. We believe that these high energy density cells developed with in-house technology will be an important landmark for ‘Made in India’ for domestic and international market.”

Sharing more details on the future plans, Mr. Mahesh said, GODI India is continuously innovating in the anode and cathode areas and planning to achieve >5.6Ah high-energy and high-power cells for the first time. GODI India has firmly planned for a 100 MWh pilot production facility for 5.0 - 5.2Ah cells followed by a GWh plant to cater to the requirements of the highly demanding electric two wheeler’s needs, which is more than 50GWh by 2030 exclusive for electric two wheelers battery segment.

With a lithium-ion cell market size of USD 5 billion for E2W by 2030, silicon is the future of energy storage as it can store nearly ten times the energy when compared to the traditional graphite anode. However, it comes with close to 400 % of volume expansion during its charge and discharge process making it difficult to stabilize. GODI India has developed an eco-friendly water-based electrode manufacturing process to stabilise the silicon, which has been successfully utilized in the manufacturing of the 5.2 Ah lithium-ion cells. In an attempt towards formulating a sustainable future, GODI India is also practising home-grown, clean, and environment-friendly processes in achieving its high energy density goals and ESG Guidelines.

GODI India is the first Indian company to get BIS certification to sell lithium-ion cells made with home grown technology and also the first Indian company to enter into a public-private partnership for large scale advanced lithium-ion cells manufacturing with CSIR-CECRI. GODI India is an innovative cell manufacturer, focusing on research and development (R&D) and Giga scale Manufacturing (Indigenous Gigafactory) and Recycling of sustainable green energy storage technology. GODI India is a signatory to THE CLIMATE PLEDGE and it is determined to accomplish a zero-carbon footprint by promoting and adopting environmentally friendly and complaisant technologies in the fastest and safest possible way. The company is committed to ethical and humane sourcing of material along with the minimal impact on the environment. log on to www.godienergy.com for more information.

Posted by editor-manu-sharma at 3:46 PM