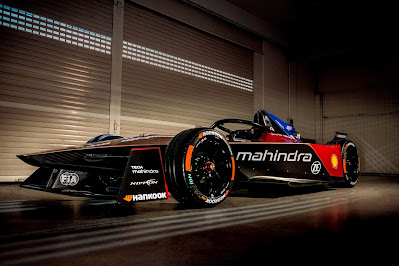 The livery was designed by the Mahindra Advanced Design Europe (MADE), bringing together a refined design style with innovative electric racing, while also marking the closer collaboration between MADE and Mahindra Racing UK.

Speaking about the livery, Asha Kharga, Chairperson, Mahindra Racing, stated, “I am delighted to launch our livery for the 2023 ABB FIA Formula E World Championship here in Valencia. The Gen3 livery takes inspiration from our Born Electric platform design language and marks the latest global colour trend in fashion, with the copper combining with the signature Mahindra red. Elements of the design pay homage to Mahindra Racing history and our previous successes, with others demonstrating our vision towards the Gen3 era of Formula E. We are especially excited to bring our cars to India in February to celebrate the inaugural Hyderabad E-Prix.”

The pre-season test in Valencia will also mark the first official outing for Mahindra Racing’s new CEO, Frederic Bertrand, who joins the team ahead of Season 9. Frederic commented: “I am very excited for this new dawn at Mahindra Racing. It is a new start for the team, with this fresh new look on the cars. I have high hopes for the direction of the team, we have some fantastic people among us as well as two brilliant drivers in Oliver and Lucas. I can’t wait to see the cars hit the track for the first time later today.”

Mahindra Racing unveil its livery at the dawn of a new era of the ABB FIA Formula E World Championship. Season 9 will see the debut of the all-new Gen3 car, as well as four exciting new race locations. Following the renewal of Rowland’s contract and the signing of former champion Lucas Di Grassi, the team looks to make a return to the front.

Mahindra Racing is a founding team – and the only Indian team – to compete in the ABB FIA Formula E World Championship, the world’s first all-electric street racing series. Mahindra Racing has an impressive stats sheet and is a multi-race winning outfit after scoring its breakthrough victory at the Berlin E-Prix in 2017. The squad is committed not only to pushing the limits of technology and innovation in the electric vehicle space, but to addressing the impact of climate change; it was the first Formula E team to be awarded the FIA Environmental Accreditation Three-Star rating and is certified Net Zero Carbon footprint since inception, demonstrating best practice and excellence in sustainability.

The ABB FIA Formula E World Championship brings intense and unpredictable all-electric racing to the heart of iconic cities around the world. With more automotive manufacturers on the grid than any other motorsport, the ABB FIA Formula E World Championship is not only one of the most compelling racing series on the planet but also an unparalleled proving ground for race-to-road electric vehicles and sustainable mobility technology.

Founded in 1945, the Mahindra Group is one of the largest and most admired multinational federation of companies with 260,000 employees in over 100 countries. It enjoys a leadership position in farm equipment, utility vehicles, information technology and financial services in India and is the world’s largest tractor company by volume. It has a strong presence in renewable energy, agriculture, logistics, hospitality and real estate.

The Mahindra Group has a clear focus on leading ESG globally, enabling rural prosperity and enhancing urban living, with a goal to drive positive change in the lives of communities and stakeholders to enable them to Rise.

Posted by editor-manu-sharma at 12:19 PM