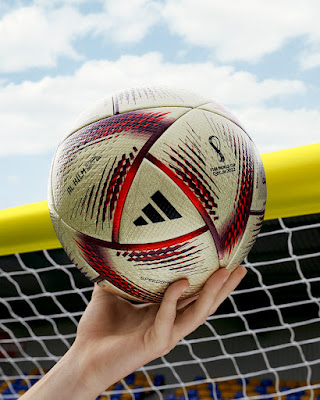 ·         Al Hilm, which translates as “The Dream” in Arabic and features a unique graphic design, will be the official ball for the semifinals and final and follows on from the Official Match Ball of the group stages, Al Rihla

·         Like Al Rihla, the Al Hilm Official Match Ball being played with on the field of play features ‘Connected Ball’ technology – an unprecedented innovation which has proved a great success in making semi-automated offside decisions faster and more accurate during this

adidas reveals Al Hilm – the Official Match Ball  http://www.adidas.co.in/al-hilm-pro-football/HC0437.html  for the semifinals and final of the FIFA World Cup Qatar 2022™. Al Hilm, which translates as “The Dream” in Arabic, follows on from the Official Match Ball of the group stages, Al Rihla, which translates as “The Journey”.

Both balls feature the same technology, engineered to support the highest game speeds as they travel faster in flight than any other World Cup ball. Al Hilm is revealed with a unique graphic design, befitting of an occasion as historic as the final matches of a FIFA World Cup™.

The design is set on a textured gold base color which features a subtle triangular pattern, drawing inspiration from the sparkling deserts of the region that surround the city, the color of the FIFA World Cup™ trophy, and the pattern of the Qatar flag. Bold red accents complement the graphic, reflecting both the generative architecture of Qatar, and once again, the country’s flag.

The ball encapsulates its namesake, Al Hilm – “The Dream”, as it connects to the twilight hours, where the red sky meets the desert sand at dusk – a time when dreams are set to come true under the floodlights of the Lusail Stadium – the stage for the Final.

“Al Hilm represents a beacon of light on the power of sport and football to bring the world together. Millions will tune in from almost every country around the globe, united by their passion for the game. We wish all teams involved in the final stages of the tournament the best of luck as they compete on the largest stage that football has to offer” said Nick Craggs, General Manager – Football, adidas.

Designed from the inside out using data from rigorous testing in adidas labs, wind tunnels, and on-pitch, Al Hilm features the same new panel shape and surface textures introduced for Al Rihla:

·         CTR-CORE: An innovative core within the ball that is tuned to support fast, precise play with maximum shape and air retention

Combined with player position data, the innovation offers Video Assistant Referees instant data, to help optimize decision-making for a seamless fan experience. By combining the ball tracking data captured by sensors within the ball and applying artificial intelligence, the new technology provides an automated offside alert to the VAR team.

The ball was also designed with the environment at its heart - all components have been carefully considered, and Al Hilm is the first World Cup semifinals and final ball made using only water-based inks and glues.

The adidas Al Hilm drops today, 11th of December and will be exclusively available via adidas.com football balls http://www.adidas.co.in/al-hilm-pro-football/HC0437.html  and adidas retail stores.

Posted by editor-manu-sharma at 5:54 PM