Zee Media Is Now The No.1 News Network With Highest Viewership 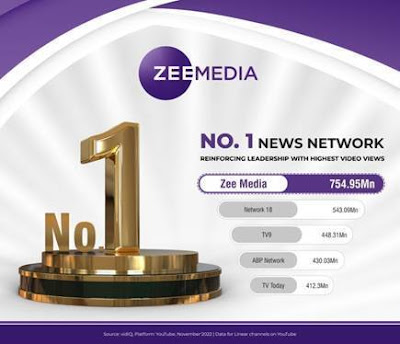 Zee Media, one of the leading media houses in India, has surpassed its competitors yet again, leading with 754.95 million views in November 2022.  Zee News the flagship channel of the Network has delivered 369 million views by surpassing its competitor Aaj Tak which is at 344 million (Source VIdIQ, November’2022).

Zee Network’s Global News Channel WION that has a subscriber base of 7.1 million on YouTube has garnered views of 80 million.

Commenting on this remarkable achievement, Mr. Devadas Krishnan, CEO, IndiaDotCom Digital Private Limited (formerly known as Zee Digital) said, “It is a moment of pride for the entire Zee network and receiving recognition from VidIQ is a testimony of our team’s hard work and determination towards delivering the best-in-class content to 754.95mn viewers. We have been catering to not only urban cities but have also received a huge viewership from regional channels, ensuring customised new-age content as per the market demand. This also encourages us to further expand our reach and continue with the same momentum.”

Zee Media channels which always has a finger on the pulse of the audience’s interest, therefore enabling them to dominate over the competitors in their segments, serving audience’s with 13 news channels in 7 different languages touching more than 528+ Million viewers through its linear and digital properties like Zeenews.com, dnaindia.com, india.com and others.

Being the pioneers in the history of Indian (Private) news channels, ZEE Network has been at the forefront of delivering the news from a nationalist perspective and not just presenting facts.

Posted by editor-manu-sharma at 3:30 PM