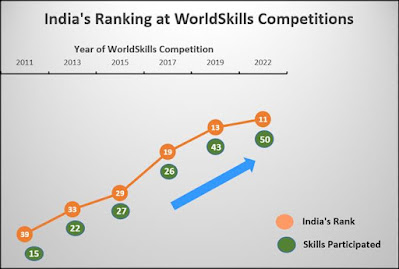 * India secured 11th position in WSC 2022 as compared to the 13th position in 2019, winning 2 Silver Medals, 3 Bronze Medals, and 13 Medallion for Excellence

WorldSkills Competition, the largest skills competition in the world, is the gold standard for skills excellence, showcasing the value of skills, raises the recognition of skilled professionals worldwide. It is conducted once in two years and this year the competition was conducted in a decentralized mode from September 3, 2022, to November 28, 2022, across Europe, North America, and East Asia. Indian teams participated in 12 countries/20 cities.

Skills being the foundation of modern life, from the houses we live in, to the societies we create, is the result of skills. They are the driving force behind successful careers and companies, thriving industries, and economies. Skills keep the world working and the world’s Vocational Education and Training (VET) leaders unite as Members and partners of WorldSkills to advance skills promotion within their own country and region, and around the world. In India, the selection of candidates who represent India on this global stage is carried forward by National Skill Development Corporation (NSDC) under the aegis of Ministry of Skill Development and Corporation (MSDE) through IndiaSkills Competition, the country’s biggest skill competition.

This year, the WorldSkills competition witnessed an overwhelming participation from India in 50 skills with 56 competitors, 50 experts, 11 interpreters and seven team managers, led by Col Arun Chandel, Vice President WorldSkills India, displaying their talents across industries, spanning across several job roles such as hotel receptionist, mechatronics, bakery, web technologies and more. The participation ranged across 50 skills wherein six skills comprised a team of two competitors each. Among the 56 competitors, 19% (11 competitors) were women which suggests that more women candidates are coming forward and developing skills through global training standards and 20% (12 candidates) were qualified from Industrial Training Institutes (ITIs).

India secured 11th position in the WorldSkills Competition 2022 (WSC 2022) as compared to the 13th position in 2019, winning 2 Silver Medals, 3 Bronze Medals, and 13 Medallions of Excellence. This win suggests the surge in awareness among youth, trainers, and other key stakeholders in the skill ecosystem about participating in the competition which inspires young people to develop a passion for skills and pursuing excellence, through competitions.

It was a standout performance by our female competitors by winning a Silver Medal in Patisserie and Confectionary skill, 1 Bronze Medal in Hotel Reception skill and 2 Medallions for Excellence in Hairdressing and Health & Social Care skill. Among the winners, Nandita Saxena won a silver medal in patisserie and confectionery trade and Anushree Srinivasan bagged a bronze medal in hotel reception skill. ITI qualified competitors also showcased a remarkable performance by winning 2 bronze medals, one each in Prototype modelling and Mechatronics skill apart from winning2 Medallions for Excellence in Autobody repair and Automobile technology skill. India continued its dominance in Water Technology skill by winning a Silver medal.

Founded in 1950, WorldSkills is the global hub for skills excellence and development. WorldSkills brings youth, industries, and educators together to give youth the chance to compete, experience, and learn how to become the best in their skill of choice. From the traditional trades to multi-skilled technology careers in the industry and service sectors, supported by partners, industries, governments, volunteers, and educational institutions, WorldSkills’ vision is to improve the world through the power of skills. It has 85 member countries and regions, all working with youth, educators, governments, and industries to help prepare the workforce and talent of today for the jobs of the future.

Skill competitions have always been a force multiplier in India’s mission to train its youth in globally relevant skills. It plays a vital role in helping the youth become more employable by inculcating soft skills such as teamwork, communication, problem-solving and time management. These competitions also offer the youth a unique opportunity to see up close the best professionals in their field and raise their standards to a global level.

Posted by editor-manu-sharma at 6:20 PM