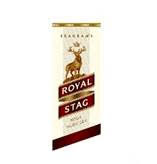 * Cricketers Rohit Sharma, Jasprit Bumrah and Suryakumar Yadav have broken the internet with the hash-tag #InItToWinIt. The posts on social media have ignited excitement amongst cricket fans across the country & social media platforms are flooded with conversations & support messages for team India to win back the T20 World Cup.

Seagram’s Royal Stag is proud to announce the new high energy campaign, #InItToWinIt, for the ICC Men’s T20 World Cup. The campaign not only celebrates the game of cricket, but also supports team India in their endeavour to bring home the cup. The campaign features celebrated Indian cricketers Rohit Sharma, Jasprit Bumrah and Suryakumar Yadav as well as global super stars like Kane Williamson, Andre Russel, Mitchell Starc and Faf Du Plessis. The campaign seeks to rally the Indian cricket fans behind the men in blue in their quest for the cup.

Cricket has always been a core pillar in Royal Stag’s brand communication. Over the years, the brand’s strategic partnership with ICC & its association with world’s top cricketers has bolstered its engagement with cricket fans across the world. This year, it seeks to capturing the emotion of a cricket loving nation through its hash-tag #InItToWinIt which has got the nation rallying behind & cheering for the Indian cricket team.

#InItToWinIt campaign was rolled out with an exciting consumer promotion where fans can get an opportunity to watch the T20 WC live in UAE by participating either through social media or by simply giving a missed call on 7329073290. The campaign will be amplified through a high decibel 360 plan across mediums like digital, print, radio & OOH.

Speaking on the new campaign, Kartik Mohindra, CMO, Pernod Ricard India, said “Our journey with cricket started in 2000 and since then we have only strengthened our association with the sport. Since 2018, We have been proud partners to ICC in our journey to be an integral part of our consumer’s numero uno passion - cricket. Royal Stag has always stood by its philosophy of “live it large”, inspiring people to dream large and be the creators of their own destiny. This year, we seek to create a social movement by rallying our fans around their collective dream - of winning the World Cup with a unique way cry, #InItToWinIt. We seek to inspire our national team to be the shapers of their destiny and bring the World Cup back to India. Partnering with ICC, one of the most coveted sports bodies in the world, also allows us to deliver a truly “Live it Large” experience for die-hard cricket & Royal Stag fans, by watching the world cup live in UAE.”

The ICC Men’s T20 World cup matches are scheduled to be held in United Arab Emirates, starting 17th October 2021 to 14th November 2021. Royal Stag had signed a 5-year long global partnership with International Cricket Council (ICC) in 2018 and is an associate sponsor for all ICC events till 2023.

Seagram’s Royal Stag is the flagship brand of Pernod Ricard India. Royal Stag has been a consistent star since launch, and a brand quite often credited to have changed the rules of the game. It is for the young, confident, progressive, and inspiring individual who embodies self-belief. The brand has been inspiring the youth of India through its communication around the philosophy of “It’s your life. Live it large”.