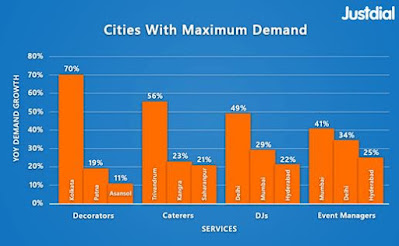 After last year’s muted celebrations due to the outbreak of COVID and the ensuing strict lockdowns, this year’s demand have started to pick up right from the Navratri and Durga Puja celebrations and is expected to stay robust during the entire festive season till Diwali.

Description automatically generatedDuring the Navratras and Durga Puja, YOY demand for decorators jumped by 141%, DJs by 113%, caterers by 82% and event managers by 33%, reports the latest Just Dial Consumer Insights. Tier-I cities witnessed a drop in searches for caterers but demand for other services remained robust.  For the report, Just Dial analysed search trends across India’s 1000 towns and cities.

For decorators, demand growth in Tier-I cities remained at par with Tier-II. Kolkata, Patna, and Asansol were India’s top-3 cities with maximum demand. Among Tier-I cities, Kolkata, Chennai, and Bengaluru saw most of the searches while Delhi, Mumbai, Hyderabad, Pune, and Ahmedabad completed the list of top 8 Tier-I cities.

Among Tier-II cities, most of the demand for decorators came from the cities in eastern India. Patna saw a 3X growth in demand for decorators while both Asansol and Durgapur saw healthy growth rate. Cities like Guwahati, Siliguri, Ranchi, Coimbatore, Bhopal, Varanasi, and Dhanbad completed the top-10 list with most demand.

However, demand for caterers saw a significant rise across Tier-II cities compared to Tier-I. Trivandrum, a Tier-II city, saw the maximum demand, while Tier-III cities Kangra, and Saharanpur were second and third respectively across the country. Among Tier-II cities, Trivandrum, Indore, and Ranchi were the top-3 cities while Mumbai, Pune, and Chennai saw demand thrust in Tier-1 cities.

Demand for DJs in Tier-II cities was also at par with that from Tier-I cities. The top-10 Tier-II cities that witnessed maximum demand for DJs were Jaipur, Surat, Ludhiana, Chandigarh, Bhopal, Lucknow, Patna, Indore, Vadodara, and Kanpur. Among Tier-I cities, Delhi, Mumbai, and Hyderabad were the top-3 cities with most of the demand followed by Ahmedabad, Chennai, Bangalore, Pune, and Kolkata.

Posted by editor-manu-sharma at 3:50 PM