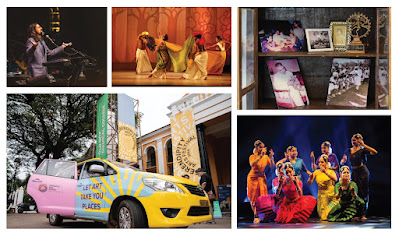 Serendipity Arts Festival is back with its 5th edition with an incredible array of interdisciplinary arts and programmes, in Panaji, Goa. Slated from the 15th to the 23rd of December, Serendipity Arts Festival (SAF) promises a celebration of the arts, with the Old GMC Complex at its heart, with additional venues including the Art Park, the Excise Building, the Multi-level Parking, the Santa Monica Jetty, the Post Office Museum, Samba Square and the Arena, to name a few. The sites of Serendipity Arts Festival 2022 have been strategically chosen for their historical value, natural beauty, and affinity to the arts. The project promises to turn the Mandovi waterfront into a hub of cultural activities that will be accessible to all.

The Festival will uphold its core values of giving immersive art experiences and inclusivity. The fundamental importance of sustainability, inclusivity and accessibility remains with a significant focus on children's programmes and those with special needs.

An initiative of the Serendipity Arts Foundation, founded in 2014 by Mr. Sunil Kant Munjal, the Festival stands as the only art event in the country that unites the creative disciplines with a commitment to catalyze tangible change across the country's cultural spectrum by engaging the public and increasing awareness of how art can impact society.

Speaking about the upcoming edition, Mr. Sunil Kant Munjal, Founder Patron, Serendipity Arts Foundation said, “The festival is a realization of our values as a foundation and we are delighted to be back with its much-awaited 5th edition in Panaji, Goa... The journey that the festival has made so far not only shows our commitment to the cause, but also marks the progress we have made and the impact we have created. Along with our collaborators and partners, we will continue to broaden the creative and collaborative boundaries of the festival to make it more interactive, immersive, innovative and accessible for everyone.”

The programming for this edition across Exhibitions, Performances, Workshops, Public Arts, Children’s programming, Talks & Book launches, and much more.

The Exhibition segment will see curations by Pramod Kumar KG, at the Old GMC Complex, and will highlight the world of specialist books on the art history of India through a uniquely immersive experience that will also have projects like Forgotten Carpets of the Jaipur Court: Craft and the Promise of the Archive, an exhibition highlighting the poignant state of craft documentation and archives within India.

Anjana Somany will enliven the world of craft and its rich traditions of materiality through space-making through her project titled, Srijan: Space Making Craft Practices of India. The exhibition segment will also have curations by Sudarshan Shetty and Veerangana Solanki, the leading exponents of visual arts. In an extraordinarily intriguing yet interesting project titled, Who is Asleep Who is Awake, Sudarshan's curation will revolve around that surreal, liminal space between wakefulness and dream, between perceptions of fact and fiction, showcasing the work of seven artists.

Veerangana Solanki will explore the online virtual space with five artists titled Future Landing: The Arcade, where 10 artists will shift from the digital to the physical.

Some other exciting projects include a special archival exhibition by Dr. Jyotindra Jain and Jutta Jain; an international collaboration between Rahaab Allana and Pascal Beausse (CNAP, France); an exhibition curated by Harkat Studio on NFTs; and film screenings, projections, and performances, and an installation/workshop on the Box Camera and Camera Obscura by Austrian archivist and artist, Lukas Birk.

The Goa Familia re-emerges, in a bigger format, curated by Lina Vincent and Akshay Mahajan, showcasing an extensive archive of Goan cultural history and traditions, highlighting the many layers of human interaction with the place, its dwellers; its documentation which tells many a story.

The music section, curated by Bickram Ghosh and Ehsaan Noorani will have an extensive segment covering a diverse range of genres from classical, fusion, folk, and indie pop to rock and more played in live concerts. The best of world music is coming together with curation by Bickram Ghosh, having maestros such as A. Shivamani, Taufique Qureshi, Rickey Kej, and many more across the nine days of the Festival. Keeping in mind the focus on promoting local artists and musicians, there will be a collaboration and a re-adaptation of folk and traditional musical practices. Sufi-Folk Tales will see Parvati Kumari and Kalpana Potawary together in an unprecedented folk and qawwali jugalbandi.

Ghosh’s curation also envisages creating platforms for emerging artists and creative innovators and will have Sanjay Mondal , leading a group of children who make music through instruments made from scrap and waste materials. Ghosh's curation will  have a segment paying tribute to the genius of R.D Burman, titled The World of Pancham: An RD Burman Tribute. The sunset cruise will also have this year's edition of River Raag, specially curated by Ghosh, encompassing classical musical performances.

Staying true to the interdisciplinary focus, Quasar Thakore Padamsee and Geeta Chandran will bring forth their projects intersecting dance, drama, music, and storytelling. Geeta Chandran is curating projects like Game of Dice, a dance production that draws from Kathakali, Chhau, and Contemporary dance with its creativity and experimentation, and Rumiyana,  a puppet theatre performance by Ishara Puppet Trust based on the works of the great Sufi mystic, poet, and philosopher Rumi.  Panchabhutam: Elements of Existence, =touches upon the five elements of air, water, fire, earth, and space and how they constitute and connect to all things living in a recital format based on Mohiniyattam thematic presentation by Neena Prasad.

Other enthralling projects that Quasar Thakore Padamsee curates are genuinely immersive and interdisciplinary. Pah-Lak, based on real stories from the 2008 Lhasa riots, is an examination of the future of non-violence. The play Made in Ilva is based on testimonies and poems from the workers at the Ilva steel plant in Taranto. He is also creating and curating the fascinating project Desdemon Roopakam, which is a play looking at the women who go missing in epics and is sung entirely like a Chamber Opera using Carnatic, Hindustani, and Folk music, to name a few.

Mayuri Upadhya creates a performative, engaging and immersive atmosphere through projects that encompass the region’s socio-cultural milieu. On the Move features young dancers from around India and showcases dance forms like hip-hop, popping and locking, waacking, break, krump, and b-boying, among others. Young solo dancers like Latha Srinivasa, Vicky Bhartaya, Nilava Sen, and Promita Karfa work will premier their artistry under her curation at the Serendipity Arts Festival.

Serendipity Arts Festival is a public art outreach and believes in engaging with people around. Thus, the Festival has included across Panjim a few public art projects, which are continuations to its large-scale public art edifices since the Festival’s inception. Time Repeats by Daku is an ongoing experimental public art project and an exploration of history repeating itself.

The Festival is inclusive and responsible for engaging with the younger generation. The idea is to be interactive and make art inviting and less intimidating. Quasar Thakore Padamsee, in collaboration with Rangashankara and Bookworm, has curated a unique project aimed at children and young adults titled The Enchanted Grove.

There will be plenty of workshops to engage audiences at the festival, including culinary, theatre, movement, and music workshops. Speaking about the overall Programming, Ms. Smriti Rajgarhia, Director, Serendipity Arts Foundation, said, “We are back with an interdisciplinary arts festival which has shows and performances across the visual arts, the performing arts, and the culinary arts. This year we hope to take over the city, with a project in every corner making Panjim the culture hub for this part of the world. With representation from different countries, across the world, different genres, and a plethora of experiences, with projects engaging with tech and hands on workshops, we hope that there will be something for the festival for everyone”.

The last two years have been dismal, where the world has changed drastically, and the arts, deeply impacted, found more unique ways to flow into the digital medium through various carriers, NFT's being one of them. Projects like Somewhere Ethereal by Mathieu Wothke and Terra Nullius/Nobody’s Land: Excavations from Image 3.0 by Pascal Beausse and Rahaab Allana aim to introduce visitors to this emergent world of arts practices, with an array of work by international artists.

Various Talks and Symposiums have been lined up as the Festival, with topical sessions like The Future of Art with Technology, and A Workshop of NFT's: A Game Changer for the Arts & Creative Economy aim to clarify questions around art and technology.

'The Island That Never Gets Flooded: A Public Arts Project by Serendipity Arts Grant will feature artists like Amche Mollem, Diptej Vernekar, Julien Segard, Nityan Unnikrishnan, Salil Chaturvedi, Tinu Verghis. This is a project for which Serendipity Arts invited nominations for local artists to create new interventions and immersions using sites, localities, and technology through interdisciplinary practices in Panjim.  The Festival will also feature the works of the Serendipity Arts Foundation Residents and Grantees from 2021-22.

This edition promises to outdo all the earlier editions. A great contributor to that has been the institutional collaborators like the Institut Francais India, CNAP (Centre National des Arts Plastiques), Paris, Jeu De Paume, Paris, Swiss Arts Council Pro Helvetia, the Embassy of the Kingdom of Netherlands, Istituto Italiano Di Cultura, who have come on board as partners owing to the Festival's collaborative and liberal outlook.

In its fifth year, the Festival aims to usher in paths to explore ways to increase and enhance public involvement and engagement. The goal remains the same: to create a sustainable, collaborative, and collective platform to highlight the shared cultural heritage of South Asia and create a global outreach.

The official hashtag for the festival is #MeetMeAtSerendipity.

Serendipity Arts is an arts and cultural development foundation created to encourage and support the arts as a significant contributor to civil society. It aims to promote new creative strategies, artistic interventions, and cultural partnerships that are responsive and seek to address the social, cultural, and environmental milieu of South Asia. Committed to innovation, SA intends to promote and create platforms for creativity, providing the wider public with a unique source of contemporary art and culture. SA programmes are designed and initiated through collaborations with partners across a multitude of fields, and each intervention uses the arts to impact education, create social initiatives, foster community development, and explore multi-disciplinarity forays in the arts, with a special focus on South Asia.

The Foundation's primary initiative and largest project, Serendipity Arts Festival is a multi-disciplinary arts event held annually every December in Goa. Curated by a panel of eminent artists and institutional figures, the Festival is a long-term cultural project that hopes to instigate positive change across the arts in India on a large scale. Spanning the visual, performing and culinary arts, the Festival’s programming includes music, dance, visual arts, craft, photography, film, and theatre. The Festival addresses pressing social issues such as arts education and pedagogy, cultural patronage, interdisciplinary discourse, and access to the arts. Serendipity Arts Festival’s intensive programme of exhibitions and performances is energised by spaces for social and educational engagement. The fifth edition of the Serendipity Arts Festival will take place in Goa from 15-23 December 2022.

Posted by editor-manu-sharma at 1:19 PM