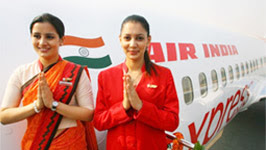 Air India, India’s leading airline and a Star Alliance member, announced that its maiden batch of cabin crew trainees and significant batch of new pilots since privatisation, have graduated.

The batch of 215 cabin crew and 48 pilots, all Indian nationals, received their wings following extensive training, and are now cleared to operate as fully-qualified crew.

Selected from more than 13,000 candidates from around the country, the cabin crew trainees passed through a 15-week programme imparting safety and service skills, and were coached to exemplify the best of Indian hospitality and Tata group culture. The training program included extensive classroom and in-flight training at the airline’s training facility in Mumbai as well as familiarisation flights.

The new pilots, comprising 40 men and 08 women, completed their training at Air India’s Hyderabad training campus, and will commence operating on the Airbus A320 fleet.  Besides the two graduating batches, more than 59 new pilots are in various stages of training to support the airline’s ambitious growth plan.

Commenting on the development, Mr. Campbell Wilson, CEO & Managing Director, Air India, said, “We are delighted to welcome these new Air Indians to the team, handpicked from India’s growing pool of talent.  Air India is hiring across all business areas, and from all parts of the country, to support our transformation and ambitions growth plans.  Attracting and developing enthusiastic and capable people is an important and crucial part of our Vihaan.AI transformation program”

The reinforcement in the cabin crew will support the continued expansion of network and fleet at Air India. The company has raised the frequency of flights between key cities on the domestic sector and has also announced direct flights between Indian cities and key global destinations like Doha, San Francisco, Vancouver, and Birmingham. Further, Air India is set to commence direct flights from Delhi to key European cities like Milan, Vienna and Copenhagen, and from Mumbai to New York, Paris and Frankfurt.