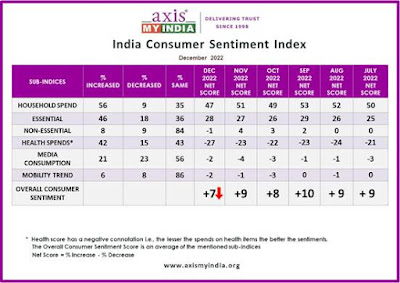 ·        Consumption of discretionary products increased for 8%, net score reduced to -1

Axis My India, a leading consumer data intelligence company, released its latest findings of the India Consumer Sentiment Index (CSI), a monthly analysis of consumer perception on a wide range of issues. The December report reveals that sentiments have dipped across 3 out of 5 sub-indices. While spends across health products has improved reflecting an increased by 3% from last month, sentiments however remain same as last month for essential consumption. The survey further highlights that 34% of consumers notice in store promotional offers and 50% of them believe it influences their purchase decision.

The December net CSI score, calculated by percentage increase minus percentage decrease in sentiment, is at +07, from +09 last month reflecting a decrease by 02 points.

The survey was carried out via Computer-Aided Telephonic Interviews with a sample size of 10454 people across 33 states and UTs. 69% belonged to rural India, while 31% belonged to urban counterparts. In terms of regional spread, 24% belong to the Northern parts while 27% belong to the Eastern parts of India. Moreover, 29% and 20% belonged to Western and Southern parts of India respectively. 61% of the respondents were male, while 39% were female. In terms of the two majority sample groups, 32% reflect the age group 36YO to 50YO and 29% reflect the age group of 26YO to 35YO.

Commenting on the CSI report, Pradeep Gupta, Chairman & MD, Axis My India, said “Consumers have experienced a full circle, starting with restricted spending due to COVID19, moving on to revenge shopping after the restrictions were relaxed to festive sentiments, and finally to stagnation due to inflation. Whether it is spends on essential/discretionary products or travel and tourism inflation continues to impact these indices of consumer sentiment. This may be one of the factors influencing customers to choose domestic travel over foreign ones. The spending capacity which is elevated basis ones savings is at the moment impact by increased interest rates. Diverting spends on healthcare is another critical reason. The post pandemic behaviour of investment in health and healthy choices continues to remain top priority of several households. Finally, even though spending on essential and non-essential appears to reflect lowered sentiments, marketers should note that exploring and experiencing enticing offers from physical stores continues to influence consumer purchase decisions. Therefore marketers should capitalise on this to improve and increase in-store purchases.”

·        Overall household spending has increased for 56% of families which reflects a decrease by 3% points from last month. The net score which was +51 last month has decreased by -4 to +47 this month

·        Spends on essentials like personal care & household items has increased for 46% of the families, which is the same as last month. The net score which was at +27 last month, increase by one this month

·        Spends on non-essential & discretionary products like AC, Car, and Refrigerator has increased for 8% of families, which reflects a decrease by 3% from last month. The net score, which was at +4 last month has reduced to -1 this month, showcasing a downward sentiments post the end of the festive season

·        Expenses towards health-related items such as vitamins, tests, healthy food has surged for 42% of the families, which is the highest in the last three months. This reflects an increased consumption by 3% from last month mainly because of the onset of the winter season. The health score which has a negative connotation i.e., the lesser the spends on health items the better the sentiments, has a net score value of -27, which has dipped - 4 from last month

·        Mobility has increased for 6% of the families, which reflects a decrease by 1% from last month. The overall mobility net indicator score which was at -1% last month, has reported -2 this month

·        Capturing the enthusiasm around the FIFA world cup, Axis My India’s CSI Survey discovered that 17% would be watching some key matches while 9% would be watching all matches. Gauging the preference interms of viewing medium, the survey revealed that more than half of those surveyed (58%) would view it TV, whereas 27% and 12% will view it on Mobile and OTT platforms respectively.

·        Deep diving into the entertainment sector, the survey exposed that Amitabh Bachchan (with 15%) is the most preferred actor, whose movies consumers like to watch the most, followed by Akshay Kumar at 7%, Salman Khan at 6%, Allu Arjun at 5% and Shah Rukh Khan at 4%.

·        Exploring sentiments around India's biggest male celebrity (in sports/movies/art except political), the survey revealed that Virat Kohli with 25% is India’s favourite, followed by Amitabh Bachchan with 21% and Sachin Tendulkar at 17%. Furthermore, the survey found out that PV Sindhu with 11% is the biggest celebrity in female category, followed by Mithali Raj with 10%.

·        In an attempt to understand consumer year-end travel plans around holidays, the survey points out that 21% would go on a domestic holiday this season. Deep diving into the considerations, the survey indicated that 23% would base their decision on the cost, while 17% would base it on the season and destination. Family decision falls under the third set of considerations when planning for holidays.

·        The survey also threw light on the newspaper reading routine of consumers and the preferred music medium, thus reflecting on consumers personal media engagement habits. The survey found out that 35% read newspaper every day and 39% prefer to listen to music via YouTube. TV channels forms the second favoured medium for music listeners.

Posted by editor-manu-sharma at 3:40 PM