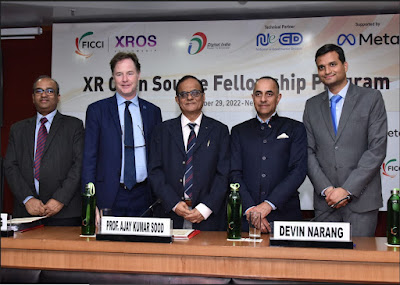 * As part of its XR Programs and Research Fund, Meta will support XROS fellowship program to enable ~100 Indian developers to work  on open source projects for the metaverse and will accelerate India’s contribution in XR technologies

Building on its commitment to accelerate India’s contribution in developing XR technologies, Meta is supporting Federation of Indian Chamber of Commerce & Industry (FICCI) with $1 million for the XR Open Source (XROS) fellowship program. Run by FICCI, XROS will support 100 Indian developers working on XR (extended reality) technologies by providing them with fellowships which includes stipend and mentoring. The National e-Governance Division, an initiative of the Ministry of Electronics & Information Technology (MeitY), will be the technical partner to the program.

The program will support developers to make contributions to open source projects related to the XR technology and will further lay the foundation for India specific solutions that are affordable, appropriate and localized to Indic languages. The XROS program is part of Meta’s global XR Programs and Research Fund under which the company announced a $2 million fund for the XR Startup program with MeitY Startup Hub earlier this year. XROS further aims to provide developers with the resources they need to create digital public goods and generate potential employment opportunities in the field of XR technologies.

Sharing his views on the program, Nick Clegg, President, Global Affairs, Meta said, “The metaverse won’t be built by one company alone. Through programs like XR Open Source, we will support Indian developers working on these exciting technologies. With their talent, insight and effort, we hope to ensure the next generation of internet technologies are built in an open, collaborative and accessible way.”

Present at the launch of the program, Prof Ajay Kumar Sood, Principal Scientific Adviser to the Government of India, said, “The vision for India’s techade can only be achieved when the young developers and start-ups, including those from tier II & III cities, contribute to enabling future technologies like XR in the metaverse. I am glad that FICCI and Meta are launching this initiative which will not only focus on providing a monetary boost to the developers but will also support them with the right mentoring to build immersive technologies.”

Speaking about the partnership on the program, Abhishek Singh, President & CEO of NeGD, said, “Open source technology driven ecosystems can play a big role in building robust digital public goods which are interoperable and follow federated architecture. Indian developers, especially from tier 2/3 cities, will play a significant role in shaping the future of emerging technology and the metaverse for India and the world. We are glad to support XROS initiative and hope that program will act as a catalyst to nurture the immersive technology developer ecosystem and the open source community in India. It will be a stepping stone for making this decade India's TechAde.“

Highlighting the importance of the program, Devin Narang,  FICCI Committee Member & Country Head-India, Sindicatum Renewable Energy, said, “XROS Fellowship Program is a uniquely curated initiative aimed at supporting Indian developers to make significant contributions to open source projects related to  extended reality (XR) technology. The program will provide the necessary impetus towards fueling the growth of investments in future technologies in line with the government's vision for making India a trillion-dollar economy by 2025. We thank Meta for their support and NeGD for the partnership on this program.”

The XR Open Source program is the second program in India through which Meta aims to boost the developer ecosystem around immersive technologies and will further the open ecosystem for building the metaverse. From the very beginning, Meta has supported and launched various open source initiatives such as No Language Left Behind (NLLB), a single multilingual AI model which supports 200 low resource languages, including 25 Indian languages.

Last year Meta partnered with the Central Board of Secondary Education (CBSE) to bring immersive technologies to over 10M students and 1M educators over the next 3 years. The partnership with CBSE underscores Meta’s commitment to India, and reflects the joint ambition to universalize STEM education by ensuring that students across India have equitable access to quality educational content which will prepare them for the Future of Work in a digitally powered economy. In June 2022, Meta launched the LeARn Program to train 40,000 students in AR, and developed the School of AR, a flagship program that up-skilled 1,000 developers to work on advanced capabilities in MetaSpark. Meta’s XR Programs and Research Fund is a two-year $50 million investment in programs and external research with industry partners, civil rights groups, governments, nonprofits and academic institutions.

Meta builds technologies that help people connect, find communities, and grow businesses. When Facebook launched in 2004, it changed the way people connect. Apps like Messenger, Instagram and WhatsApp further empowered billions around the world. Now, Meta is moving beyond 2D screens toward immersive experiences like augmented and virtual reality to help build the next evolution in social technology.

Established in 1927, FICCI is the largest and oldest apex business organisation in India. Its history is closely interwoven with India's struggle for independence, its industrialization, and its emergence as one of the most rapidly growing global economies. A non-government, not-for-profit organisation, FICCI is the voice of India's business and industry. From influencing policy to encouraging debate, engaging with policy makers and civil society, FICCI articulates the views and concerns of industry. It serves its members from the Indian private and public corporate sectors and multinational companies, drawing its strength from diverse regional chambers of commerce and industry across states, reaching out to over 2,50,000 companies.