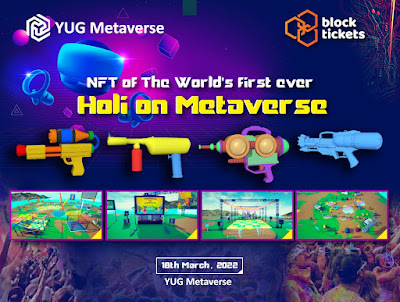 Metaverse is the next big thing in the world of Web 3.0 and experiments in organizing unique metaverse events are happening around the world. One such first-of-a-kind event was held in India on the occasion of Holi on 18th March.

Yug Metaverse, an exceptional metaverse platform, along with Blocktickets (www.blocktickets.io), an NFT based ticketing platform, collaborated to organize the first-ever Holi set in metaverse. Participants from across the world joined in to celebrate the festival of colors.

The event was live on the Yug Metaverse platform for 48-hours on-stop starting from 18th March till 20th March. The event witnessed participation by people from diverse age groups, including children and young adults.

The participants chose their Avatars and were able to walk around the metaverse, meeting new people, playing Holi with each other, dancing, and making new friends. All this could be done in the safety and convenience of their homes.

This first-of-its-kind Holi events allowed Holi enthusiasts to celebrate with complete strangers from around the world without having to step out of their homes. Participation to the event was kept free but as a special gift, NFT package including the event tickets was made available for only Rs 199.

People who bought the NFT package were provided with a collectible NFT ticket which authenticates that they attended the first-ever Metaverse Holi event. Apart from that, NFT of colors and water gun was airdropped much to the surprise of the children.

"These special NFTs can be kept as collectibles as a lifelong memory by the participants or they can also be sold in the blockchain based marketplaces. The tickets for the event were minted on the Binance blockchain." told Dr Ravi, Co-founder, Blocktickets

“Though the NFTs of this historic event could fetch thousands of dollars on NFT marketplace, we had purposely priced it at rock bottom of Rs 199/- only. Blocktickets is on mission that millions of internet users in India to adopt NFT and Web 3,” said Nishant Chandra, Co-founder, Blocktickets.

According to Abhinav Garg, Co-founder, Blocktickets, “when tickets are made into NFTs, many of the problems associated are solved. Scalping or black-marketing of tickets which annually costs USD 15 billion is eliminated. Authenticity of ticket is backed by the Blockchain. Event Organizers substantially increase their revenue as tickets can be resold multiple times thereby enabling them to earn royalties whenever the NFT ticket changes wallets.”

Blocktickets is a blockchain-based Web 3 Dapp, founded by Chandra, Garg, and Dr Ravi in the end of year 2021 to provide a platform that sells tickets as NFTs. It combines the US$70 billion tickets market, the US$65 billion event sponsorship sector, and the US$25 billion NFT industry. Sponsors can profit from airdropping their brand NFTs during the event, which will increase engagement.

Posted by editor-manu-sharma at 4:11 PM