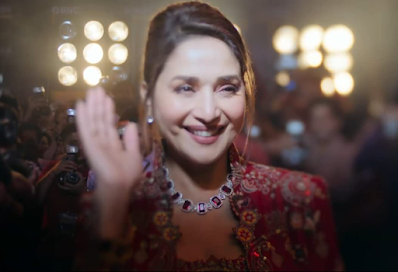 IMDb (www.imdb.com), the world’s most popular and authoritative source for information on movies, TV shows, and celebrities, today shares that The Fame Game, staring Madhuri Dixit, ranks #62 globally as of week ending March 6, 2022 making it the most popular India  web series of the year, so far based on data from January 3 to March 14, 2022. During this time period, the show also ranked #34 globally on IMDb’s Most Popular TV shows chart. The series beautifully captures how the facade of stardom crumbles, and family secrets and wounds from the past come tumbling out when an actress goes missing

The Fame Game is the most popular series in India, United Kingdom, Bangladesh, Canada, Australia, United States, Pakistan and United Arab Emirates (in no particular order), based on IMDb audience page views. Madhuri Dixit, who portrays superstar “Anamika Khanna” in the Netflix series, consistently trends on the IMDbPro STARmeter and has 81 acting credits on IMDb.com. Apart from this, the star’s highest rated movies on IMDb.com are Prahaar, Parinda and Devdas.

Additionally, entertainment fans were eager to learn more about Rajshri Deshpande‘s breakout performance as officer “Shobha Trivedi” in the series, as indicated by her recent popularity on the IMDbPro STARmeter chart. The week following The Fame Game’s release, Deshpande trended as the top ranked star of the series. IMDb determines STARmeter rankings based on the actual page views of the more than 200 million monthly visitors to IMDb. Deshpande has starred in major projects like Sacred Games, Angry Indian Goddesses, Manto and The Sky is Pink. Her career STARmeter peak of #282 came from her performance in Netflix’s The Sacred Games.

Posted by editor-manu-sharma at 1:36 PM