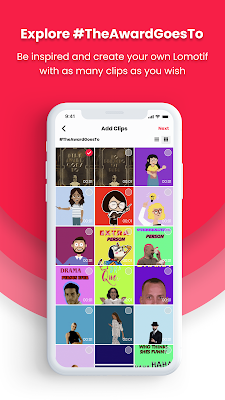 * New Lomotif campaign creates peer-to-peer nominations trend ahead of awards season: How to figure this trend out and make it your own

With the biggest award night in Hollywood being a few days away, Lomotif’s new awards-themed in-app campaign titled ‘The Award Goes To’ has created a new trend that is making every movie fan’s dream come true with a brilliant twist.

The short video sharing app has a special treat in store as it gives users the chance to nominate their loved ones, friends and family for fun awards, with the fanfare that comes along with the prestigious event in the world of film. Lomotif’s ‘The Award Goes To’ campaign runs till April 8th 2022 under the hashtag #TheAwardGoesTo. This presents Lomotif’s community of everyday creators with a chance to celebrate their friends and loved ones with ‘nomination’ video clips and filters for “Entertainer of the Year”, “Most Popular Comic”, “Drama Queen”, and “Most Musical” amongst many others.

All creators have to do is get on to Lomotif’s #TheAwardGoesTo discovery page. From there, they can explore a featured clips library to spark creativity for their own content. Users can tap onto the wealth of content shared by its global online community, Lomotif-created video clips and music from award-filming films by Universal Music Group. From creating personal video clips, to remixing clips shared via the app’s global community of users, users can nominate those in their lives who deserve an award - quirky categories such as Drama Queen, Entertainer of the Year, Most Popular Comic, have appeared as part of this trend, and Lomotif users are encouraged to create as they wish.

Speaking about the campaign, Paul Yang, CEO of Lomotif, said, “Enhancing our user experience and engaging creators through campaigns that are light-hearted and personalised has been our utmost priority as an app. With one of the most popular global award ceremonies being just a few days away, I am happy that Lomotif is providing a platform for creators to freely express themselves through short-form video, while celebrating key moments in pop culture.”

He further added, “Campaigns like these will help Lomotif users find inspiration in the everyday, and playfully engage their creative side.”