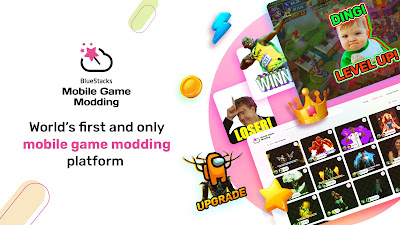 * Powered by now.gg’s new NFG platform, mobile games based on Cocos, Unity and Unreal engines can be modded and shared, changing the way people play games

BlueStacks, the world’s first cloud-based Android gaming platform, has launched another first: Creator Studio & Creator Hub for modding and sharing modded games in India. With this launch, mobile games developed on the Cocos, Unity and Unreal engines can be easily modded and shared, reaching over four billion users and 4.5 million creators. The company introduced Creator Studio and Creator Hub for gaming enthusiasts in India, today.

BlueStacks Creator Studio & Creator Hub open up the possibilities of user-generated content to the global mobile gaming community, where they can create and share infinite versions of mobile games. Modding can be done at three levels: basic, intermediate, and advanced. Basic modding involves playing with color; for example, you can have dark mode for a game, akin to Instagram filters. Intermediate modding links to in-game events such as effects on screen during kill or win shots. Lastly, with advanced modding, you can change 2D and 3D textures inside the game, including game elements like avatar’s clothes.

Since its global launch last month, mobile game modding has received great response from streamers and gamers  globally, with the United States, Brazil and Vietnam driving the maximum engagement. FreeFire has emerged as the most modded game and ‘Running Trump’ is the most used effect so far.

“By 2025, the majority of mobile gamers will play modded games,” said Rosen Sharma, CEO and founder of BlueStacks and now.gg. “Imagine searching for a game and finding modded versions from your favorite gamers, streamers and fans. Making mobile game modding globally accessible opens up endless possibilities for gamers and creators, changing how we build, share, and experience mobile gaming forever.”

“User generated content – like modded games – are an important form of self-expression. In the same way we change our clothes to suit our moods, people will soon demand to play only games with mods to match their mood, desired experience, and preferences,” said Huabin Lin, Technology Director at Cocos. “BlueStacks mobile game modding is paving the way for mods to be the default way of mobile gaming in the future.”

“Popular PC games can have tens of thousands of mods created for them. However, modding was not possible for mobile games until now,” said Aevatrex (Jonathan Fermin), leading mobile gaming streamer. “With BlueStacks mobile game modding, there are endless possibilities. Inclusion of BGMI is a great news. One of my favorite mods in the game is where a dancing Mr. Bean shows up at the victory event.”

BlueStacks is the world’s first cloud-based Android gaming platform adopted by over 1 Billion gamers in 100 countries and six continents around the world. In 2020 over 6 Billion gaming sessions of 70,000 different games were played on BlueStacks. In 2021 BlueStacks launched BlueStacks X (beta) the world’s first game streaming service for mobile games. BlueStacks has a global team of over 400 and is one of the most recognized tech brands in the industry. The world's top game developers leverage its platform to promote their games.

now.gg is the mobile cloud company changing the gaming experience for game developers and consumers. With the first global mobile platform-as-a-service for game developers, now.gg enables gaming communities to play games on any device or OS, share games instantly on their social channels and pay in-game through payment channels they already have. No longer constrained by geography, device or attribution, now.gg opens the world of consumers to game developers and unlocks entirely new revenue streams.