#IndiaFightsCorona On Twitter: Tweets Around Seeking Or Providing Medical Help Increase By 1958% 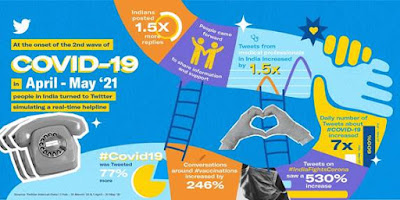 Twitter’s research identified, analysed and compared COVID-19 Tweets sent out during the initial months of the second wave in India (April 01 - May 31, 2021) with Tweets from the months preceding it (February 01 - March 31, 2021) to gain insights into the conversations that unfolded on the service

A boost to the conversation: People in India came together to support each other and share information bolstering replies during the surge months by 1.5x

Tweets from medical professionals in India increased by 1.5x (50%) during the surge as they used Twitter to share important information

Since the beginning of the COVID-19 pandemic, Twitter has played a critical role in keeping people connected and amplifying authoritative information from credible sources. Especially over the course of this past year, the way people have used Twitter has evolved. With the onset of the second wave of COVID-19 in India, Twitter emerged as a real-time helpline as people turned to the service seeking and offering help to secure life-saving facilities, medicines, food, and much more. An incredibly positive people’s movement to support one another took shape on the service.

Tweets on COVID-19 grew manifold during April 01 - May 31, 2021, and the service witnessed 100% growth in COVID-19 conversations compared with the previous two months (February 01 - March 31). Twitter analysed this growth and classified the conversations into four broad categories:

Medical help: Tweets around seeking or providing medical help increased by 1958% (20x). #Covid19 was Tweeted 77% more during the second wave,  #Blood was Tweeted 72% more as compared to the Feb-March period, #Plasma saw an 834% increase and #SOS was Tweeted 152% more during this time. In fact, the exchange of Tweets between people seeking help and those volunteering to connect them with resources boosted the volume of replies - revealing a 1.5x increase.

As the distribution of COVID-19 vaccines expanded and vaccination drives gained momentum, people followed and participated in Twitter conversations on vaccine awareness, availability, and much more. Tweets around #Vaccine and #Vaccination went up by 246%. To support this conversation, Twitter introduced a home Timeline prompt that points people to vaccine-related updates and information from authoritative sources.

Sharing information: With a critical mass of expert organisations, official government accounts, health professionals, and epidemiologists on the service, people leveraged it to find accurate information on the latest developments, best COVID-19 practices, vaccination drives, and other relevant information. They Tweeted with hashtags - #CoronavirusUpdates, #CoronaIndiaUpdate, #Covid19IndiaResources, among others - amping up conversations by 916% (10x).

Raising funds: The spirit of humanity and helpfulness surfaced as people came forward to contribute to relief efforts, and fundraising conversations went up by 731% (8x). It is interesting to note that Australian cricketer Pat Cummins’ (@patcummins30) Tweet announcing his monetary support to India was the most Liked and Retweeted Tweet during this period.

Mental health: Mental well-being remained top of mind for people and recorded a 153% (2.5x) increase during the surge. People Tweeted with hashtags such as #DoctorsMentalhealth, #CovidCounselling, #CovidDepression, #CovidInsomnia, among many others. Prayer or hope emerged as the dominant sentiment with the folded hands 🙏 being the most Tweeted emoji.

While Tweets on #IndiaFightsCorona saw a 530% increase, among local and state-related conversations, #DelhiFightsCorona and #MaharashtraFightsCorona saw a significant increase in Tweets - with conversations going up by 1872% and 2377%, respectively. Twitter also introduced several features, including multiple state-specific Event Pages for credible updates from the region.

More than ever, Twitter remains committed to serving the public conversation. It introduced a number of features and initiatives in support of the COVID-19 conversation in India. Some of these were a dedicated COVID-19 hub on the Explore page, several Twitter Events Pages that bring together the latest Tweets from a number of authoritative and trustworthy government organisations, media and civil society sources in local languages, an SOS page, related Topics, Twitter Lists of credible accounts to follow, among several others. The WHO has also engaged with account holders on the service around important issues. Twitter also prioritised the roll-out of Spaces in India, to give people access to more ways of having informative conversations and staying connected.

Posted by editor-manu-sharma at 2:29 PM