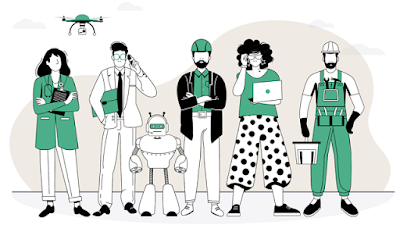 Grene Robotics has developed extensive AC6ISRT capabilities in the form of Defence OS over an 8 year of R&D journey backed by decades of system development experience for the armed forces.  Grene Robotics advisory board consists of Retired Defence Scientific Advisor, Deputy Chief of Army Staff, BEL Director and Air Force veteran who was instrumental for designing India's most comprehensive command and control system for the Indian Air Force called IACCS.

Why is this critical

India must stop adopting reactive measures and embark on responsive and autonomous systems to be prepared for modern warfare. Manual weapons and point based defence systems cannot fight modern warfare driven by AI and Robotics. For the first time in India and many times globally rogue forces have adopted cutting-edge technologies such as UAV's, Smart Swarms etc. Jammu Air Base on June 27th was attacked by such technologies to drop explosives next to Mi-17 hangar.

PLA is already toying with advanced weaponry in Western Theatre Command (WTC) tasked with military operations against India along the Line of Actual Control (LAC). Drones are being used to train the infantry to conduct beyond Visual Line of Sight Targeting. The PLA also developed a high-altitude and high-speed armed drone, the WJ-700, in 2021. In 2020, it introduced armed robots, and in 2021, reconnaissance robots, in its military exercises.

Point defence Anti-UAV systems will not be able to counter and protect large defence bases, NCR and linear infrastructure like international borders and such sensitive areas against aforementioned threats. A minimum of 300 systems are required to be deployed to protect the entire western border and this is financially not a viable option. On the contrary 6-7 sectorally deployed Indrajaal systems with their seamless connectivity can protect the entire western border.

Autonomous Defence/Weapon Systems is the 3rd revolution of the warfare and Indrajaal's design principles are based on delivering such autonomy to the Defence Forces leveraging a combination of 9-10 modern technologies powered by Artificial Intelligence, Cybersecurity and Robotics that is capable of identifying, assessing, deciding, acting and evolving autonomously in real-time. Whether the threat is single or multiple or a combination of UAVs, Low-RCS, Loitering munitions and such, Indrajaal is capable of countering all such threats.

4. Ability to integrate with all current weapons suite and infrastructure

5. Honeycombed cell structure seamlessly built over a combination of 9-10 technologies

Wg Cdr MVN Sai (Retd), CEO Defence, Grene Robotics said, “I urge the defence leadership to take an integrated and comprehensive approach against all the UAVs, loiter ammunition swarm drones and low RCS threats with indigenously developed Autonomous Defence Systems.   Conventional defences will be overwhelmed in a swarm attack scenario and an AI Enabled Autonomous Dome with its own ecosystem of sensors and processing is the way forward. The process of establishing a fully functional system is an evolutionary process and needs technology vision and user involvement.”

We believe that technology augments human capability, not replace it. The answer to some of the greatest challenges faced by humanity can be found in nature. What is stopping us from learning from them is the lack of tools to transfer knowledge from nature to human design.

At Grene Robotics we are leveraging Artificial Intelligence, Machine Learning and Cognitive Computing to building future autonomous technologies that can self-learn and self-adapt to foster mankind’s vision towards a better planet. We believe autonomy is the future and we are delivering it NOW.

We put in over 12 years of R&D to build Grene Robotics. Today, we are an innovation-led, robust, cutting-edge technology organisation that delivers Autonomy as a service, augmenting human capabilities. Our solutions are helping Governments and organisations across the globe to run efficiently.