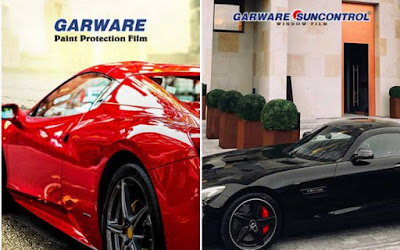 Garware Hi-Tech Films Limited (GHFL) which manufactures premium quality polyester films and is the only manufacturer of sun control window films in India announced that it has bagged a silver medal at the International Window Film Conference and Tint-Off competition held from June 7-9 at Orange County Convention Center in Orlando, Florida.

GHFL enjoys a strong consumer base across the globe, including the US market. GHFL's participated in the exhibition with the “Global" brand under which it sells the Window film in USA.

Mr. Jeason Teasley, who used the "Global" brand window film in the Tint-off competition, bagged a silver medal at the event which is organized annually and “brings together all segments of window, security, decorative, and paint protection film industries under one roof for quality education, business-building, and competition,” according to the event website.

This year a total of 90 contestants were in the fray for the Window film competition, out of which six entries were for the global brand. Mr. Teasley won the silver medal.

Speaking about the win Ms Monika Garware the Vice Chairperson and the Joint  Managing Director of GHFL said that “It is a proud moment for GHFL as the win validates GHFL's ability to produce high-quality products which can compete with the best in the biggest market in the world. This proves that our products are among the best in the world and pass all the test of application skill, quality of the product, ease of application, and a combined score of all these has won us the prize,”

Every year, the most talented window film tinters, and paint protection film installers participate in the event and compete for the top prize in various categories. The participants are judged by the industry veterans based on the quality of their products and the procedure. The product used by tinters in the competition makes a remarkable impact on their performance.

“The win re-establishes our brand "Global" as a very superior product and this win will have a good pull for the brand in the US market, attracting more tinters and retailers to use our brand. We will be using the win to promote the product extensively," Ms Monika Garware added.

Garware Hi-Tech Films Limited (formerly Garware Polyester Ltd.) (BOM: 500655) is the flagship company of the Garware Group co-promoted by the Chairman and Managing Director Mr. S.B. Garware in the year 1957 along with the Founder-Chairman Late Padmabhushan Dr. Bhalchandra Garware. The company makes Hi-Tech specialty performance polyester Films in India and has its State-of-the-Art manufacturing facilities at Aurangabad in Maharashtra, India. GHFL is the pioneer and one of the largest exporter of Polyester Films in India and the winner of top exporters’ awards for continuous 33 years from PLEXCOUNCIL.

Garware Hi-Tech Films Ltd.’s (GHFL) manufacturing facility in Aurangabad is vertically integrated, from manufacture of polyester chips to the finished product of polyester films with four independent manufacturing lines and a business that spans the globe.  Polyester Films are used for variety of end-applications such as PET Shrink films for Label application, Low Oligomer PET films for insulation of hermetically sealed compressors motors, Electric motor insulation and cable insulation, sequin application films, TV and LCD screen application, Packaging applications etc. GHFL is also the market Leader and India’s only manufacturer of Sun Control window films for Building, safety and auto applications. The company has facilities for manufacturing various coated products and co-extruded products for specialty application, apart from its capacity to design the recipe for raw material of PET films to suit the end application of the product.  The company has also developed surface-protection films and Paint Protection Films designed to deliver the highest level of protection and impact resistance which has applications in many sectors.

Posted by editor-manu-sharma at 6:02 PM