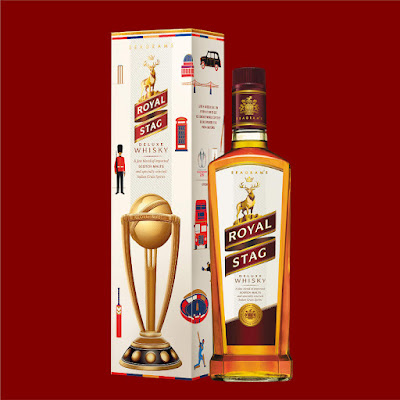 * Sunidhi Chauhan and Jassie Gill lend their voices to Seagram’s Royal Stag’s #InItToWinIt World Cup anthem, written by Vayu and composed by Tanishk Bagchi, the anthem aims to cheer & support team India in their quest for the T20 World Cup!

The anthem celebrates the game of cricket & supports team India in their endeavour to bring home the cup & is an extension of the larger brand campaign #InItToWinIt, shot across different geographies to capture the passion of fans across the country.

The anthem song is composed by Tanishk Bagchi, who recently broke records with his song – ‘Raatan Lambiyan’ and written by the talented Bollywood singer and songwriter, Vayu. In the voice of Sunidhi Chauhan & Jassie Gill, the song echoes the spirit behind #InItToWinIt, celebrating the passion for the game & inspiring team India to re-create history. The bilingual anthem is upbeat and high on energy & sure to become a household favorite amongst fans across the country.

Commenting on the anthem, singer Sunidhi Chauhan said, “I am proud to have been able to support team India through this anthem and would like to thank Royal Stag for conceptualising & bringing to life the perfect cheer for the Indian cricketing fans for the upcoming T20 World Cup. Looking forward to the team repeating the 2007 success, after all, we are all in it to win it”.

Singer Jassie Gill commented, “It’s definitely a very creative approach to rally support from Indian fans across the country. Royal Stag is going above and beyond to really do something that is truly inspiring for the Indian team & exciting for the fans. I thank them for making me a part of this.”

Composer Tanishk Bagchi added, “I look forward to crowds singing this anthem during the matches. This really is the ultimate way for Royal Stag and Indian cricket fans worldwide to show support for Team India. We are surely ‘In it to win it’ this time.”

The ICC Men’s T20 World cup matches are scheduled to be held in United Arab Emirates, starting 17th October 2021 to 14th November 2021. Royal Stag had signed a 5-year long global partnership with International Cricket Council (ICC) in 2018 and is an associate sponsor for all ICC events till 2023.

You can watch the video here: #InItToWinIt Anthem

Seagram’s Royal Stag is the flagship brand of Pernod Ricard India. Royal Stag has been a consistent star since launch, and a brand quite often credited to have changed the rules of the game. It is for the young, confident, progressive, and inspiring individual who embodies self-belief. The brand has been inspiring the youth of India through its communication around the philosophy of “It’s your life. Live it Large”. Seagram Royal Stag is a proud sponsor of ICC.

Posted by editor-manu-sharma at 5:25 PM