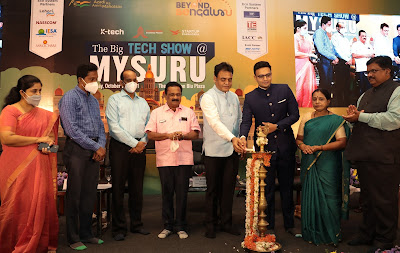 With upcoming Bengaluru Tech Summit 2021, the Government of Karnataka and KDEM under Beyond Bengaluru initiative in the city of Mysuru launched a big event called ‘The Big Tech Show’. The program is aimed at enhancing growth in the IT /ITeS, Business Processing Outsourcing (BPO), Electronic System Design Manufacturing (ESDM), and Telecom sector industries located in emerging technology clusters in Tier II & III cities across the State. ‘Beyond Bengaluru’ is an initiative of KDEM and the Department of Electronics, IT, BT and S&T, Government of Karnataka. Earlier this month, the first ‘Beyond Bengaluru’ conclave was held in the city of Hubbali.

Bengaluru in the last two decades has emerged as the most preferred destination for investments by leading Indian and global multinationals. The Beyond Bengaluru initiative of KDEM will contribute to Government of Karnataka’s existing efforts to move the technology and innovation related activity to the cities beyond Bengaluru. The Government of Karnataka has already taken a number of steps and rolled out several initiatives aimed at enhancing the ecosystem in these cities, leading to an increase in demand from IT/GCC/ESDM companies for workforce in Tier II & III cities.

In India, 30% of the overall GDP is driven by the digital economy.  With the aim to attract at least 100 GCCs by 2025, KDEM has launched the new strategy called as ‘Spoke-Shore’ initiative at The Big Tech Show in Mysuru. This initiative of the Beyond Bengaluru mission of KDEM, will focus on attracting and setting aspirational goals for GCCs and creating employment opportunities for 10,00,000 (direct and indirect) candidates by 2026. The Beyond Bengaluru initiative aims to attract and host 5000 IT companies and start-ups by 2026 in the Mysuru, Hubbali and Mangaluru clusters.

Dr. C. N. Ashwath Narayan, Hon'ble Minister Electronics, IT, BT, and S&T, and Minister for Higher Education, Skill Development announced in the launch of Future DigitalJobs@Mysuru an exclusive initiative by KDEM for Spoke Shore strategy. Speaking at the event, he said, “Through this initiative, new engineering graduates in tier 2 and tier 3 cities will have the opportunity build careers. Candidates selected through this initiative in the Mysuru Cluster will also be provided launch pad training, specific to the job roles. With the Spoke Shore strategy, we are looking at 5 new GCCs now coming to Mysuru, under the Spoke-Shore GCC strategy of KDEM, in the next six months. As a part of the strategy, select companies were recognized and MoUs have been signed between KDEM and Bherunda Foundation, ISAC, as well as KITS and VMWare.”

Speaking at the Inaugural program Dr. E.V. Ramana Reddy, Additional Chief Secretary- Department of Electronics, IT-BT & S&T said, “The Government of Karnataka has a clear vision on building the innovation and technology ecosystem in cities Beyond Bengaluru. In line with the increasing importance to support and promote innovation, growth and development in these cities, the skill development plan of the Spoke-Shore initiative is to focus on creating a talent pool for Spoke Shore strategy for beyond Bengaluru. The aim is to create employment opportunities for 10,00,000 (direct and indirect) candidates by 2026. Further, the Beyond Bengaluru initiative is a harbinger to ushering dividends from IT, ITES, BPM & Electronics sector along with employment creation in tier 2 & 3 cities of Karnataka”

Mr B.V. Naidu, Chairman Karnataka Digital Economy Mission addressing the gathering explained that last two decades, Off-shore strategy has helped many GCC to come and create their off-shore Hubs in Bangalore.  Now the time has come that these hubs need to be supported by “Spoke-shore strategy” and create their Spokes at Beyond Bangalore clusters, Mysore, Hubli and Mangalore. Spoke-shore strategy will help GCCs to expand to these emerging clusters where the Talent is available. KDEM will help in creating such transformation.

In his keynote address by Mr. Alok Kshirsagar, Senior Partner, McKinsey & Company said, the reality of ‘1 Trillion Dollar Digital Economy’ by 2025 depends upon Stares like Karnataka and initiatives like KDEM and its Spoke Shore strategy. With over 13,500 start-ups YTD in Karnataka and the robust ecosystem giving wings to start ups through strategic investment and policy interventions by leveraging the robust innovation climate, the state will contribute towards tapping the 1 Trillion Dollar digital opportunity.

Mysuru being a preferred destination for businesses across several industry verticals will play a key role in the digital transformation and development in the state. Further, as a part of the event, His Highness Sh. Yaduveer Krishnadatta Chamraja Wodeyar, Royal Palace Mysuru delivered a special address highlighting the potential of Mysuru as a driving force for the future digital economy and businesses in India.

Further, Sh. Javagal Srinath, Renowned International Cricketer, along with Mr. Sh. Sanjeev Gupta, MD & CEO, Lahari engaged in a Fireside chat on ‘Sports Tech’. Speaking at the event, Sh, Javagal Srinath said, “With the rapid digital transformation across sectors including sports and shifts beyond the metros, the new GCC strategy will be a catalyst for growth in markets such as Mysuru. Not only will this create employment opportunities in the new digital economy but will also put Karnataka on the map of driving futuristic growth across sectors.”

The event included a series of panel discussions by industry heads – Spoke-shore: the new GCC strategy, Pace of Technological Changes, Mysuru Ready for Future Digital Jobs, and Start-ups from the soil of Mysuru, on the future of cluster cities and technological changes in business, promising a level-playing field in new business opportunities and investments for cities like Mysuru.

Industry experts who presided the event shared their views on areas of technological interest like Agri-tech, artificial Intelligence, and the concept of Industry 4.0. The first event in this series ‘Impact & Innovation @ Hubli’ successfully concluded on October 5, 2021 at Hubli with the inaugural address by Hon’ble Chief Minister of Karnataka, Sh. Basavraj Bommai. Before culminating into the Bengaluru Tech Summit (BTS 2021) event, scheduled for 17th to 19th November, a third cluster event titled ‘Mangalore- a strategic IT destination’ Mangaluru will be held on the 29th of October, 2021.

The Bengaluru Tech Summit 2021 is scheduled to be held in its virtual avatar between November 17 and 19th, 2021 with its central theme "Driving the Next". BTS 2021 will witness the coming together of Global Leaders, Indian Corporate, R&D and Start-Ups from IT, Deeptech and Biotech deciphering the future, showcasing next-gen technologies, forging partnerships and alliances.

Details of the Panel Discussions

TiE Mysuru Chapter aims to build and nurture next generation of entrepreneurs and start-ups in Mysuru region by the special initiatives like TiE University Program to promote Student Start-ups and TiE Women Pitchfest to promote women Entrepreneurship in Mysore region.

With an objective to increase the share of Digital economy in the state, the Government of Karnataka set up the Karnataka Digital Economy Mission (KDEM), a Section-8 organization, which acts as a knowledge bridge between the industry and the government. To meet the objectives, KDEM has been working towards the five focus areas, viz. IT Products & Services, BPM & GCC promotion; Innovations & Start-ups; ESDM; Beyond Bengaluru; and Talent Accelerator.

The Beyond Bengaluru Program

The Beyond Bengaluru program of KDEM, in particular, is spearheading the objective of proliferating the growth of digital economy in clusters beyond Bangalore. This is done for select identified clusters in the state by developing and facilitating a product-based ecosystem. Building a community of key industry players, entrepreneurs, start-up owners, academia, accelerators, and student community, the Beyond Bengaluru program of KDEM is steering towards getting investments and generating employment in the state.