BharatPe Announces The Launch Of Its First Marketing Campaign For Postpe 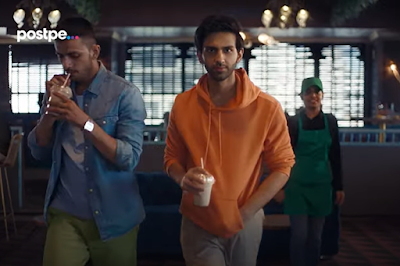 BharatPe, India’s fastest growing Fintech company, announced the rollout of its TVC campaign ‘De Dena Aaram Se’, to promote its newly launched Buy Now, Pay Later (BNPL) product- postpe. This campaign is based on a simple tenet of relationship based on trust and comfort between a shop owner and his loyal customer, that enables the retailer to offer credit to the customer based on verbal assurance that he will pay back soon. postpe allows end users to share the same relationship with the brand irrespective of where they shop. The campaign will be live across TV and digital channels, throughout the ICC World Cup 2021 and the ongoing festive season.

As part of the campaign, a video commercial has been created around the theme- ‘De Dena Aaram Se’ that captures various use cases of customers’ retail purchases at - ranging from a coffee shop, multiple retail outlets, restaurant delivery, to salons and clubs. The commercial closes with a close-up of postpe's logo with a tagline saying ‘don’t pay. postpe.’

Speaking on the launch of this new campaign, Mr. Suhail Sameer, CEO, BharatPe, said, “We have recently forayed in the Consumer Fintech category with the launch of 12% Club and postpe. We are confident that postpe can totally transform the Buy Now Pay Later (BNPL) category with its compelling proposition of enabling credit for one and all, anywhere and everywhere. The initial response has been overwhelming and I am confident that this latest campaign will help create awareness for postpe amongst consumers. The ICC T20 World Cup is one of the most sought after cricketing events and our new campaign launched with this event will go a long way in catapulting the growth of postpe. We are already facilitating disbursals at a run-rate of INR 150 crores per month in just 2 weeks of launch, and I am confident to scale this up 10x by the end of the campaign.”

Adding his thoughts on the new TVC campaign launch, Mr Parth Joshi, Chief Marketing Officer, BharatPe, said, “Buy Now Pay Later has been around for a while but I believe that postpe is the first product that is really democratizing it- with its universal usage (on QR, Card or Online) and interest free credit of upto Rs. 10 lacs for a period of 30 days. The TVC has been conceptualized keeping in mind the personal connect and trust that a customer enjoys with his preferred local store owner in India. We have tried to weave in various use cases to connect with a larger audience, as our postpe product is not limited to a specific set of stores. The TVC has been crafted with the objective of communicating how postpe enables our customers to pay on credit anywhere and for any amount, and pay it back later as per his convenience. We will be running this campaign for the October –December 2021 quarter.”

BharatPe forayed into the customer segment in August 2021 with the launch of 12% Club, a product that allows individuals to take loan at 12% interest as well as invest and earn upto 12% interest rate. It also entered into the ‘Buy Now Pay Later’ (BNPL) category last month with the launch of the first-of-its-kind BNPL product, that is not only limited to big-ticket purchases but also assists with micro-purchases. The product is designed for the new-age customers who believes in shopping smart and are well-versed with digital payment modes.

BharatPe will also be running a host of other promotional campaigns to garner customers’ interest and enhance engagement. All transacting customers stand a chance to win 3,500 free passes for the World Cup matches to be held from 17th Oct to 14th Nov 2021. Also, the company is running a referral program where users can get up to 5% cashback.

Posted by editor-manu-sharma at 4:10 PM