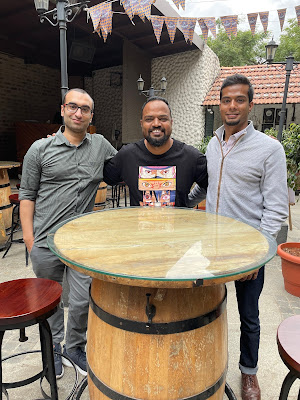 * Plans to Expand Its Team, Deepen Its Global Penetration through Community Building and Developer Evangelism

Arcana Network, a fast emerging Blockchain startup that offers Decentralised storage and data privacy platform for Ethereum and EVM compatible app developers, today announced that it has raised $2.3 million from leading investors in the Blockchain Ecosystem. The strategic round of funding was led by Republic Crypto and Woodstock Fund, and also saw participation from Digital Currency Group (DCG), Hyperedge, Sahil Lavingia's shl.vc, Fenbushi Capital, LD Capital, and Paradigm Shift VC. The company has raised this round in less than a quarter since their seed funding.

The $2.3M round also saw participation from Ganesh Swami, CEO of Covalent, Ajeet Khurana, Buidlers Tribe, Nishal Shetty of WazirX, Ajit Tripathi from Aave, along with Arcana’s seed investors AU21 and Arcanum Capital who’ve also invested in this round.

With this fundraise, Arcana expects to expand its squad, strengthen its product portfolio and soon launch Arcana's XAR token. The company also plans to invest in community building; they had recently announced a waitlist for developers and witnessed 100s join the queue to get their hands on its SDK. They have closed the first series of project partnerships that will participate in Arcana’s Alpha Testnet Launching in Oct ’21.

Founded by Mayur Relekar (CEO) and Co-founders Aravindh Kumar, and Abhishek Chaudhary in 2019, Arcana Network aims to be the most developer-friendly decentralized storage option amongst the other storage platforms such as IPFS, Filecoin, Storj, Sia… and gives developers a privacy stack in addition to storage to help apps securely manage data with complete privacy preservation.

Mayur Relekar, CEO of Arcana believes, “Data privacy and security will be first-class citizens in every app’s stack. Privacy and ownership of data will be a necessity for every product and developers need easy to use tools to fulfil this. With a vision to be privacy-first and developer-friendly platform, Arcana is working with developers across sectors from DeFi, NFT platforms, Social Networks, and Wallets, to traditional web 2.0 products in Fintech, Healthcare, and Enterprise SaaS, to bring privacy and security to their data.”

Speaking on the occasion, Aravindh Kumar, Co-founder said, “We have a great partnership with our investors, who continue to believe in our vision for Arcana and how we intend to serve better tools for developers and their users. More than 60% of the strategic fund raised would be devoted to build the community and develop a robust platform that will help app developers from easily authenticating users who can carry their keys and identity while interacting with apps, to easily sharing and managing access to data.”

Himanshu Yadav, Founding Partner from Woodstock, said, “Arcana's team has been building for more than 2 years and is tackling some of the biggest use cases and problems in the blockchain space - decentralized storage, privacy, and identity. Their modular and interoperable infrastructure stack will abstract a lot of complexities for the dapp developers thereby helping accelerate the application development on top of these next-generation Web 3.0 protocols.”

Arcana Network, is a fast-emerging Blockchain startup that offers Decentralised storage and privacy stack with authentication, end to end encryption, key management, and access control for Ethereum and EVM compatible chain’s app developers. Established in June 2019, Arcana’s mission is to catalyse privacy and security of user data by being the most developer-friendly platform for data privacy. The company in July 2021 raised its seed funding from angel investors and veterans in the crypto space.

Posted by editor-manu-sharma at 8:31 PM