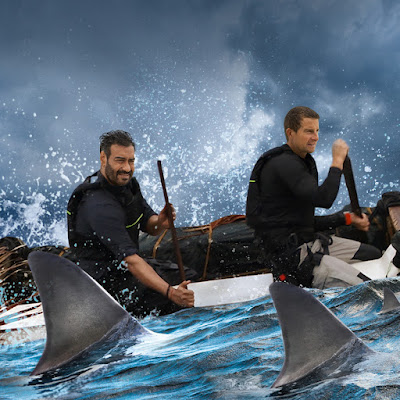 * A discovery+ exclusive, Into the Wild with Bear Grylls featuring Bollywood star Ajay Devgn will be releasing its power-packed episode on 22 October 2021 at 6 AM IST only on discovery+

* Trailer Link for Into The Wild with Bear Grylls and Ajay Devgn: https://drive.google.com/drive/folders/1kJ79VUR2FUs4xS9MLeQLur1Rr-J23gP1?usp=sharing

Discovery, India’s leading real-life entertainment network which has notably premiered the most iconic and record breaker special with Prime Minister Narendra Modi in a memorable episode of Man vs Wild with Bear Grylls and last year, featured personalities like Superstar Rajnikanth and Akshay Kumar, is back with yet another gripping season featuring the Super Cop of Bollywood, Ajay Devgn. Shot in the Indian Ocean, Discovery today revealed the first look of its most anticipated show. Witness how Bollywood's favorite actor and the wild icon Bear Grylls turns a destination into a complete adventure-packed wilderness.

In this discovery+ exclusive, the world-famous adventurer Bear Grylls and Bollywood’s Superstar Ajay Devgn embark on a survival experience that begins in a sea dominated by sharks and unfavourable weather, eventually moving to uninhabited islands. The seasoned adventure specialist who has hosted multiple distinguished personalities from across the globe, is seen engaging in a candid conversation with Ajay on his family, career, and life in the new season. Moving out from his comfort zone, Ajay Devgn is seen going beyond mere endurance skills for this real-life adventure that celebrates his instinct, endeavor, and inclination to survive in the most desolate islands of the Indian Ocean.

“This is my first ever expedition into the wild and I can tell you it wasn’t child’s play! My father was an action director and in my career span of 30 years in the Indian industry, I have had the fortune to play several roles including some dangerous action ones too. And, this was one of those times when I had to put those learnings to the test  again. I’m so glad this opportunity came my way, it helped me explore and go beyond my comfort zone. A special salute to Bear who has been inspiring millions to explore and develop a much-needed relationship with nature, and of course to keep me safe in the wild. From hungry jungles to the depths of the ocean, Bear knows it all!” shares Ajay Devgn on his shooting experience.

“To get to take the legendary Ajay into the wild and have an adventure with him was a privilege. Desert islands are always tough to survive on and Ajay showed total commitment to do what we needed to get out in one piece. He was also incredibly honest, sharing so many insights into his life and career and I value that honesty so much. One thing that I've learnt about Ajay is he is a quietly spoken man, but he is a man with great love and strength in his heart. Said Bear Grylls on working with Ajay Devgn.

“Into the Wild with Bear Grylls is one of our most acclaimed and loved series and with the new episode, the motive was clear - to make it bigger, better and widen our audience base by bringing forth a deadly combination of thrill, entertainment, and adventure through two iconic daredevils, Ajay Devgn and Bear Grylls. The show has been appreciated worldwide and we expect to land big with this special season.”, said Megha Tata, Managing Director- South Asia, Discovery Inc.

Into The Wild with Bear Grylls is an innovative new format inspired by Man vs Wild, which is one of the most watched wilderness survival television series in the world. The first episode of the series featured Superstar Rajinikanth early last year who made his television debut with Bear Grylls. Followed by the Khiladi himself Akshay Kumar on-board in the last episode of this cult franchise which has become a household name.. ‘Man vs Wild with Bear Grylls & PM Modi’  disrupted the Indian media landscape, establishing itself as the TV event of the year. Beyond Prime Minister Narendra Modi, Bear Grylls has also hosted prominent celebrities in the past such as then sitting American President Barack Obama, Kate Winslet, Roger Federer, Julia Roberts and many more. Into The Wild with Bear Grylls is produced for Discovery Communications India by The Natural Studios and Banijay Asia.

Into The Wild premieres on discovery+, Discovery and Discovery HD and will be available in 7 languages including English, Hindi, Tamil, Telugu, Bangla, Malayalam and Kannada. The episode will exclusively premiere on discovery+ India and Philippines on 22nd October followed by other EMEA regions, including the United Kingdom, Netherlands, Poland, Italy, Denmark, Finland, Norway and Sweden. It will also be showcased on Discovery’s network of channels in 140+ countries across Asia Pacific and Discovery Central Eastern Europe, Middle East and Africa including India, New Zealand, Japan, China, South East Asia, Philippines, Taiwan, South Korea, Singapore, Malaysia, Indonesia, Australia and New Zealand.

Into The Wild with Bear Grylls and Ajay Devgn has attracted marquee advertisers including Vini Cosmetics Pvt Ltd and Citroen as Co Powered By Sponsors. While Dell, Omron Healthcare, Spotify and Amazon Alexa have come on board as Associate Sponsors, LIC is the Partner Sponsor for the title.

Bear Grylls has become known worldwide as one of the most recognized faces of survival and outdoor adventure. His journey to this acclaim started on a small island off the U.K. coast where his late father taught him to climb and sail. Trained from a young age in martial arts, Grylls spent three years as a soldier in the British Special Forces as part of 21st SAS Regiment. It was here that he perfected many of the survival skills that his fans all over the world enjoy as he pitted himself against the worst of Mother Nature. Despite a free-fall parachuting accident in Africa, where he broke his back in three places and endured many months in military rehabilitation, Grylls went on to become one of the youngest climbers ever to reach the summit of Mount Everest.

He then went on to star in seven seasons of the Discovery Channel’s Emmy award-nominated “Man vs. Wild” TV series, which became one of the most watched shows on the planet, reaching an estimated 1.2 billion viewers. Since then, he has hosted more extreme adventure TV shows across more global networks than anyone else in the world including the BAFTA award-winning “The Island With Bear Grylls,” “Bear’s Mission with,” for ITV, “Man vs. Wild,” “Running Wild” for NBC and “Absolute Wild” for Chinese TV. He is a No. 1 best-selling author, and has written over 85 books selling in excess of 15 million copies. He is an honorary colonel to the Royal Marines Commandos and the UK’s youngest-ever chief scout, and the first ever global Chief Ambassador to 55 million worldwide Scouts.

‘discovery+’ is an exciting new D2C streaming app, launched to satiate the unmet need of a differentiated product offering premium real-life entertainment. Priced competitively with an introductory offer of INR 399 per annum, the app has been developed and curated specifically for India. discovery+ offers thousands of hours of exclusive content across 55+ genres, including Science, Adventure, Food and Lifestyle, in 7 languages including Hindi, English, Tamil, Telugu, Malayalam, Kannada and Bengali. The premium subscribers have access to a vast selection of never-seen-before Premium Discovery titles, must-watch documentaries, India originals and exclusive acquisitions. Free users of the app have access to all-time favorites from the Discovery library.