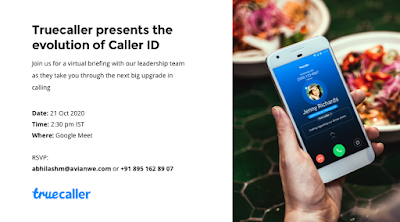 Headquartered in Stockholm, Sweden, with offices in Bengaluru, Gurgaon, Mumbai and Nairobi, Truecaller is a service that is loved by hundreds of millions of people around the globe for accurate spam detection, fraud prevention, SMS filtering and caller ID. The free and ad-supported version of Truecaller continues to be the most popular choice among users because it does not place any restriction on the number of calls it will identify or the amount of spam it blocks.

Commenting on achievement, Alan Mamedi, CEO and co-founder, Truecaller said, “Truecaller was built with the vision to make communication more effective for everyone and this is what has fueled this spectacular growth over the years. This vision started with caller ID but now also offers so much more including SMS blocking and even digital loans. We're on an exciting journey to take Truecaller to the next level, and we are humbled by the trust our users have shown in us.”

People use Truecaller to stay ahead. It helps them know who’s getting in touch, filter out unwanted calls and SMS, and focus on what matters. The company provides a suite of unique services such as a dialer that offers caller ID, spam detection, messaging and more. Truecaller’s mission is to build trust everywhere by making communication safe and efficient. Headquartered in Stockholm, Sweden, the company was founded in 2009 by Alan Mamedi and Nami Zarringhalam. Investors include Sequoia Capital, Atomico and Kleiner Perkins.

Posted by editor-manu-sharma at 11:21 AM