A Little For You Could Be a Lot For Another, So Let’s #BanTheBargain 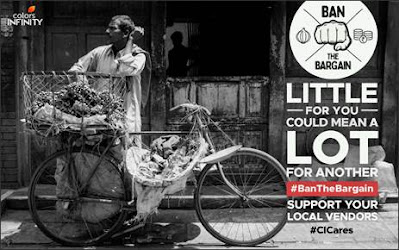 Statements like these and many other similar ones would sound familiar to most who have shopped for their daily groceries, vegetables & fruits from local vendors. Chances are you’ve been one to bargain as well, unknowing of the consequences for the street vendor. The negative impact of the pandemic has been deep and long-lasting on the country’s economy. It has also resulted in countless job losses across industries, but it has been particularly brutal for the unorganized and self-employed workforce. While street vendors are striving to get their lives back on track, a prevalent social-evil has been constantly lurking over their shoulders – Bargaining.

According to a social media survey of over thirty thousand participants, conducted by Colors Infinity;

* While bargaining might save us just a little, it greatly affects the livelihood of the vendors and their families. Picking up the baton, Colors Infinity hopes to spread awareness about the repercussions of public bargaining practices through a new social media campaign – #BanTheBargain.

Talking about the initiative, Navin Shenoy – Head of Marketing, Youth, Music and English Entertainment, Viacom18, said, “Customers bargaining with street vendors is a not a new phenomenon, but the effects of bargaining are more severe now due to the pandemic. Understanding the plight of our local vendors and avoiding bargaining for a small sum will go a long way in helping them stay in business and sustain livelihood for their families. Through #BanTheBargain, we’re trying to reach out to the general populace, and in a light-hearted manner communicate the message.”

#BanTheBargain campaign encapsulates its message through a satirical series of comic strips, goading videos, sarcastic PSA posters, and a thought-provoking conversation with some vendors that are truly affected by bargaining. Culminating with an appeal to the audience to take pledge of not bargaining.

Navin further added, “Our team has taken the pledge to not bargain with street vendors, we hope others will realize the importance of supporting our campaign and follow suit.”