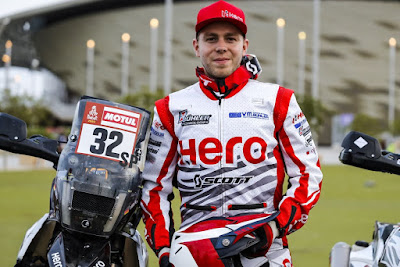 Hero MotoSports Team Rally, the rally racing team of Hero MotoCorp - world’s largest manufacturer of motorcycles and scooters - is all set to commence a new season of competitive racing.

The full-strength, three rider Team of Joaquim Rodrigues, C S Santosh and Sebastian Buhler is geared up to participate in the first campaign of the season, the upcoming Rally Andalucia, slated to be held from October 6-10, 2020, near the town of Villamartin in Spain.

This is the first occasion when the entire Team has regrouped since the tragic demise of legendary rider Paulo Goncalves at Dakar 2020, followed by a protracted period of inactivity due to the Covid-19 induced restrictions.

The entire Team regrouped in Portugal recently and has been doing intense training to make a strong comeback into competitive rally racing. Rally Andalucia - the only confirmed Rally so far prior to the Dakar 2021 - will serve as the perfect platform to get the riders and crew back to collaboration mode and into the mindset of racing.

Sebastian Buhler, an upcoming rookie, has been groomed by the Team since last season. With remarkable temperament and fast developing skills, he made an impression at the Pan Africa Rally 2019 and the Dakar 2020. Buhler is now all set to make his debut as the official team rider for Hero MotoSports at the Rally Andalucia.

The Rally Andalucia - covering approximately 1000 kilometers over the course of four days - will offer the participants a chance to test their vehicles, the new technologies, practice navigation and get used to the new Covid-19 regulations with Dakar 2021 in sight.

Wolfgang Fischer, Team Manager, Hero MotoSports Team Rally: “We are all very happy to be together again after this long break and doing what we love the most, racing. Getting back to racing brings to us the memories of our departed Hero and dear friend Paulo, but we are trying our best to come back stronger with his spirit always guiding us to never give up. We have been keeping ourselves busy in this period with development work on the bikes. We are also very happy to officially welcome Sebastian into the team and are very excited with the promise and freshness that he brings.”

Joaquim Rodrigues, Rider, Hero MotoSports Team Rally: “It has been a really difficult time for me and my family. My focus has been to fight through this and get back to racing, while keeping alive the never-give-up spirit of Paulo. It is going be hard to get back on the bike again and that is going to be my biggest battle this year. The Hero MotoSports team is like a second family to me, supporting me and giving me strength through these tough times. Over the past few weeks, we have been training, testing and developing our bikes. Looking forward to the Andalucia Rally and then the Dakar.”

C S Santosh, Rider, Hero MotoSports Team Rally: “It feels really good to be back on the saddle again after such a long break. We have been training hard over the past month in Portugal and also testing and supporting development work on our bikes. Being back together with all the guys and working as a team again is definitely the best thing to have happened for me in a long time. While most of the races have been cancelled this season, we still have the biggest one of them – the Dakar on the cards. So, the Rally Andalucia will be an important race for me and everyone as we try to get race-ready for the Dakar 2021.”

Sebastian Buhler, Rider, Hero MotoSports Team Rally: “I have been waiting for a long time to get back to racing, so I am very happy to be here and back together with the team. We have been training hard over the past few weeks. I am really looking forward to Rally Andalucia as it will be my first rally as the official team rider. I am very excited to be a part of the Hero MotoSports Team and look forward to contributing to the Team’s success.”

Established in 2016, Hero MotoSports Team Rally has rapidly emerged as one of the top teams in international rally-racing, delivering impressive performances across the world. With back-to-back Top-10 Dakar finishes and a 100% arrival rate for the machines, Hero MotoSports Team Rally has made its mark at the Dakar Rally. In 2019 the Team stepped-up its game with a Rally win (Pan Africa Rally), two Podium finishes (Merzouga and Desert Storm), four stage wins (1 in Silkway Rally, 2 in Pan Africa and 1 in Rally Du Maroc) and six stage podiums (Silkway Rally).

Posted by editor-manu-sharma at 1:50 PM