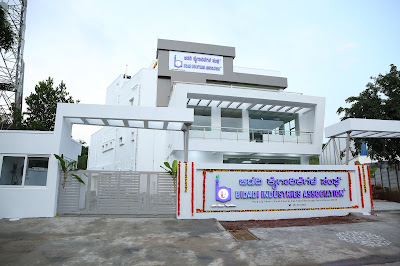 With an investment of about INR 65 Million, the new office building, with a total built up area of 12400 sq. ft. over 3 floors, is a state-of-the-art facility and provides a comprehensive foundation for Bidadi Industries Association (BIA) to pursue its mandate of maintenance and development of the industrial area for all its member industries. This new building will serve the purpose of hosting office space for its board members called the Executive Committee (EC) of BIA, staff of a Special Purpose Group (SPG) constituted to oversee the improvement of infrastructure in the area and also serve as a hub for interaction among its member industries and for enhancing fellowship, collaboration and solidarity. The building houses a 140 seaters Multi-Purpose Hall (MPH), a 30 pax conference room, an 8 pax meeting room, two fully furnished plug and play offices with Audio Visual systems, as well as a cafeteria and a sundeck. These facilities shall be made available for common use, at a nominal fee, by industries, generally MSMEs, who do not have their own facilities and have to look at costlier alternatives.

State of the Art New Office Building of BIA

The other dream project for BIA has been the CSWM Facility, which when it goes live in mid-October 2020, is expected to bring in the much needed cleanliness to keep the industrial area and its surroundings free from the nuisance of strewn municipal waste. Built at a cost of INR 54 Million, partly seeded by BIA and partly funded by CSR contributions from major corporates lead by Toyota & Bosch, the facility will have the capacity to scientifically process 10 tons per day (TPD) of dry waste, 3.5 TPD of wet waste and 1.5 TPD of reject waste, by collecting segregated waste from industries and villages in the industrial area. Mr. K V Rajendra Hegde, President of BIA, said, “We want to ensure that the unsightly menace of stinking garbage strewn on the streets should be managed properly and the area kept clean in our industrial area.”

The event was graced by senior bureaucrats from the Government of Karnataka, industry heads and Executive Committee Members from BIA, while the event was beamed live to 200 guests from member industries and special invitees who participated virtually, in accordance with the COVID-19 protocols.

Mr. Vikram Kirloskar, Vice Chairman of Toyota Kirloskar Motor (TKM), who joined the event virtually, said, “BIA has been focusing on the development and upkeep of infrastructure in the Bidadi Industrial Area for more than five years now. The recognition

from the Government of Karnataka for the unique model of BIA, with Toyota and Bosch as lead companies supporting the initiatives, and the robustness of its functioning as an organization bears testimony to the progress seen on the ground, and the inauguration of these two projects marks a significant milestone for BIA.”

“It’s commendable the way, Bidadi Industries Association (BIA) has modeled itself to support its member industries, be Large Enterprises or MSMEs. The CSWM Facility showcases the commitment of BIA under a unified approach with proactive cooperation between Government authorities and Industry. This is a unique model of collaboration of industries under the umbrella of BIA to implement prioritized, single window, need-based Social Engagement Initiatives which will eliminate duplication and create synergies.” said Mr. Soumitra Bhattacharya, Managing Director, Bosch Limited and President of Bosch Group in India who attended the virtual event.

Bosch and Toyota have recently rejuvenated one lake each in the industrial area enriching the ground water table and increasing bio-diversity & lung space. As Mr. S. Rajendra, Vice President, BIA, outlines, “the CSR effort from BIA member industries in these past five years has resulted in significant improvement of social infrastructure for the community. In the fight against COVID-19, for Ramanagar District alone, the combined CSR spend of INR 19.5 Million and the combined relief-funds contributed of INR 80 Million, show that in these difficult times too, member industries have come forward in the true spirit of CSR”

As BIA emerges out of the shadows of COVID-19 to inaugurate these two key projects under difficult circumstances, with member industries, many of them MSME, struggling under the weight of diminishing returns and looking forward to a period of recovery and stability, BIA holds out a lamp at the end of the tunnel, as the President, Mr. Hegde concludes, “We will continue to provide development and sustainability in the best way that we know – by being vigilant, ear-to-the-ground, sensitive to member concerns, taking active support from government, and leveraging big business financial and moral support to take our MSME members along on the shared path to success.”

Posted by editor-manu-sharma at 5:04 PM