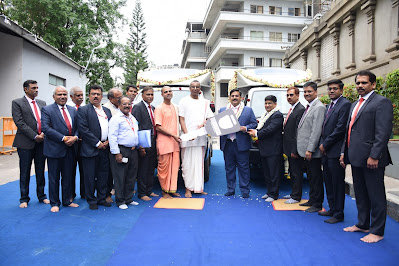 * The partnership will help feed nutritious mid-day meals to over 5,000 government school children

Union Bank of India, as a part of its CSR initiative, has donated two customised food delivery vehicles to The Akshaya Patra Foundation for feeding nutritious and hygienic meals to over 5,000 children every day.

The vehicles will be used at the NGO’s kitchen in Mangalagiri, Andhra Pradesh that serves over 12,500 government school children.

Speaking on the occasion, Shri Nitesh Ranjan, Executive Director, Union Bank of India, said, “Union Bank has always strived towards the country’s progress. While we are making progress with respect to economic growth of the country, issues like hunger, malnutrition, food insecurity persist. Until a fundamental need like access to food and education is not met, we cannot sustain growth. Organizations like Akshaya Patra are making a commendable contribution to this effect. By partnering with Akshaya Patra in their efforts, we hope we are making a difference to the lives of thousands of children.”

Acknowledging the support, Acharya Ratna Dasa, General Manager, The Akshaya Patra Foundation said, “We are thrilled about this partnership with Union Bank of India and immensely grateful to them for donating the two new delivery vehicles. Our collaboration with Union Bank of India for the school feeding programme started 13 years ago and has just strengthened with time. We hope it will continue to flourish as we believe that such partnerships play a crucial role in helping us reach out to over 1.8 million children across the country every school day.”

He further added, “We are also thankful to the Ministry of Education, Government of India and respective State Governments for providing us the opportunity to serve the children.”

About Union Bank of India

Union Bank of India is one of the leading public sector banks of the country. The bank, having its headquarters at Mumbai (India), was registered on November 11, 1919 as a limited company. Recently, Andhra Bank and Corporation Bank were amalgamated into Union Bank of India with effect from 01.04.2020. Today, it has a network of 8850+ domestic branches, 11200+ ATMs, 8216 BC Points serving over 120 million customers with 75000+ employees.

The Bank’s total business as of 31st December 2021 stood at Rs.16,06,986 crores, comprising Rs. 9,37,455 crore of deposits and Rs. 6,69,531 crore of advances as of 31st December 2021. Union Bank of India is the first large public sector bank in the country to have implemented 100% core banking solution. The Bank has received several awards and recognition for its prowess in technology, digital banking, financial inclusion, MSME and development of human resources.

About The Akshaya Patra Foundation

The Akshaya Patra Foundation is a not-for-profit organization that strives to address classroom hunger and malnutrition in India. As the implementing partner of the Government of India’s flagship school feeding programme, through its relentless commitment to creating a secure and educated future, the Akshaya Patra has grown from serving just 1,500 children in 5 schools in 2000 to over 1.8 million children in 19,039 government and government-aided schools from its 61 kitchens across 14 States and 2 Union Territories. Through this scheme, Akshaya Patra aims to fight hunger and, at the same time, bring children to school.

Since 2000, Akshaya Patra has worked towards reaching out to children with wholesome food every single school day. The Foundation is continuously leveraging technology to cater to millions of children.