Electro-Offensive And A Leader In Premium Segment: BMW Group Posts Strong Sales For 2021 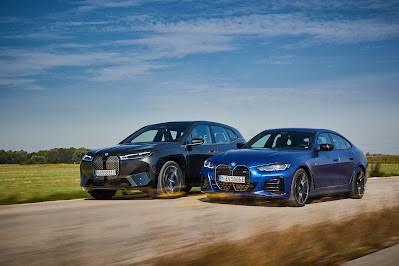 * Sales of fully-electric vehicles more than doubled to 103,855 units

“Despite supply bottlenecks and the continuing coronavirus pandemic: We achieved a strong sales performance in 2021, thanks to a powerful operational performance and stellar product line-up. Our brands reported numerous all-time best sales results around the globe – spearheaded by the BMW brand, which is number one in the global premium segment,” said Pieter Nota, member of the Board of Management of BMW AG responsible for Customer, Brands, Sales. “With more than 100,000 fully-electric vehicles sold last year, ramping up electromobility was our clear focus,” Nota continued.

With the introduction of the BMW iX and BMW i4, the BMW Group has significantly expanded its digitalisation of the customer interface.

For instance, as well as offering intuitive configuration to simplify the purchasing process, pre-configured new vehicles and newer used cars across the entire model range can already be bought online in the BMW Group’s domestic market of Germany. By 2025, the company plans to sell around a quarter of its vehicles entirely online.

Data-based recognition of service requirements enables proactive customer care. This means the customer can be contacted directly and receive assistance remotely, wherever possible, or a visit to the workshop can be set up easily and efficiently, if needed.

The new My BMW/MINI app offers even more additional features, such as booking of digital services or broad access to charging options, and also provides a direct channel to customers.

The BMW brand ended 2021 with global sales up 9.1 percent (to 2,213,795 vehicles) on the previous year. Thanks to its young and attractive product line-up, BMW achieved its highest-ever sales figures.

With 37,939 BMW iX3* vehicles sold in 2021, about one in ten BMW X3 vehicles delivered to customers worldwide was fully electric. During this same period, one in three customers worldwide who bought a MINI 3 door model opted for the model’s fully-electric variant* (34,851 units). At the same time, the BMW i3, the world's only fully-electric premium vehicle in the compact segment, continued to grow in its ninth year: With 28,216 vehicles sold, 5.4 percent more BMW i3 vehicles were sold than in the previous year.

The BMW Group released two key innovation flagships, the BMW iX and the BMW i4, onto the market late last year. In 2022, the company will further expand its electric line-up with fully-electric versions of the BMW 7 Series and BMW X1 and, in 2023, the high-volume BMW 5 Series. These will be joined by other models, including the successor to the MINI Countryman and the all-electric Rolls-Royce Spectre.

The Neue Klasse, which is uncompromisingly geared towards fully-electric drivetrains, will make a significant contribution to BMW Group sales volumes from the middle of the decade onwards.

The MINI brand’s product range will be exclusively all-electric by the early 2030s, while Rolls-Royce will also be an all-electric brand from 2030 onwards. All future new models from BMW Motorrad in the field of urban mobility will be fully electric.

Another milestone in the success story of BMW M GmbH

With a total of 163,542 M vehicles (+13.4%) delivered to customers, BMW M GmbH once again posted all-time record sales in both the high-performance and performance segments. The new BMW M3 and BMW M4 performed especially well. Sales of the BMW X5 M and BMW X6 M Sports Activity Vehicles also increased year-on-year. In the performance segment, growth came mainly from the new 4 Series derivatives – and the 4 Series Coupé, in particular. The X3 M40i* and X7 M50i* also enjoyed growing popularity. This year, the fully-electric BMW iX M60* and BMW i4 M50* models will further contribute to the future success of the brand.

The MINI brand delivered 302,144 vehicles to customers last year – 3.3 percent more than in 2020. Around 17 percent of these vehicles had an electrified drive train. More than one in ten MINI customers opted for the fully-electric MINI: the MINI Cooper SE* (34,851 units). The MINI Electric is the MINI family’s highest-volume model and was a driving force for the brand in 2021, delivering growth of 98.2 percent worldwide. With a planned realignment of the model range, expansion of production capacity and development of new target groups and markets, the MINI strategy will remain focused on successful, profitable growth going forward.

Rolls-Royce Motor Cars reported the highest sales in the brand’s 117-year history, with 5,586 units sold worldwide (+48.7%). This overall figure includes all-time record sales in most regions, including Greater China, the Americas and Asia-Pacific, and in multiple countries across the world. The past year was characterised by high demand worldwide for all models, particularly Ghost and Cullinan and all Black Badge variants, with current orders extending well into the third quarter of 2022.  Bespoke commissions were at record levels and the company announced, alongside the launch of Boat Tail, that Rolls-Royce Coachbuild would become a permanent fixture in its future portfolio. The marque continues to evolve as a true luxury house and now prepares for the historic market introduction of its first all-electric motor car, Spectre, in the fourth quarter of 2023.

2021: Best year ever for BMW Motorrad

With 194,261 units (+14.8%) delivered to customers, 2021 was BMW Motorrad’s best year ever. As in previous years, sales growth was assured by the BMW 1250 GS, which once again made a vital contribution to the success of the brand in 2021, with around 60,000 units sold. The all-new BMW R 1250 RT got off to a good start in the marketplace, as did the large R 18 models, with four derivatives presented so far. The new S 1000 R was also very well received: Together with the first BMW M model for BMW Motorrad, it brought fresh energy to the four-cylinder scene and demonstrated BMW Motorrad’s technology leadership.

BMW & MINI sales in the regions/markets

In China, the BMW Group once again posted a new all-time sales high in 2021 and continues to lead the premium segment. A total of 846,237 BMW and MINI vehicles were delivered to customers in China (+8.9%). Sales of electrified vehicles in China continued to gain momentum with growth of 69.6 percent and more than 21,000 units of the BMW iX3. The company’s fifth-largest market, South Korea, also increased its sales by 11.0 percent in 2021, with 77,592 units sold.

In the US, BMW brand deliveries climbed 20.8 percent to 336,644 units and were therefore on a par with the pre-crisis year 2019. The MINI brand sold 29,930 vehicles in the US in 2021 – an increase of 6.4 percent compared to the previous year. The BMW X model range accounted for 60 percent of total US sales last year.

In Europe, total sales figures for BMW and MINI reached 948,087 units (+3.9%). Belgium marked a historic first for the company, as the BMW brand led a country’s total market in Europe for the first time. The Netherlands also posted an all-time high: The BMW iX3* was the best-selling electric model in the premium segment, with 2,733 new vehicle registrations.

The BMW Group continued to grow its segment share in its domestic market of Germany, with 267,917 units delivered (-6.8%) in 2021, and leads the premium segment, with a market share of over 35 percent. Sales of fully-electric vehicles more than doubled (27,248 new vehicle registrations). Including the 43,842 PHEVs that were sold, a quarter of all vehicles delivered in Germany were already electrified.