#UnPause With OPPO And JioSaavn’s 24-Hour Concert, 24 Hours From Now, With A Handpicked Line-Up 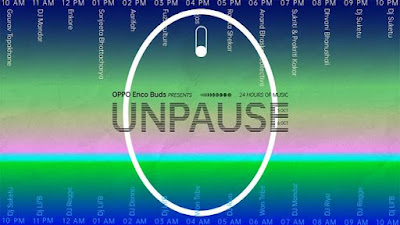 * It will feature renowned artists like Dhvani Bhanushali, Fuzz Culture and DJ Suketu among many others from across genres

OPPO and JioSaavn have come together to host #UnPause, a one-of-a-kind 24-hour concert. The live stream will begin at 10 am on 5th October on OPPO India’s YouTube channel.

As part of its Enco Buds campaign, OPPO also created a TVC with Tamil-Canadian artist Shan Vincent de Paul.  Shan not only composed the track ‘Unnai Pathu’,  but also directed and starred in the music video that showcased the Enco wireless earbuds' 24-hour uptime feature through a surreal, time-lapse-trip: where dawn rolls into day, and then finally  into dusk as Shan pops in his Encos and disappears into the mellowness of the track ‘.

Founded in 2007 as Saavn, JioSaavn is an audio streaming service for South Asian music and artists. In March 2018, Reliance Industries Limited (RIL) acquired a majority stake in JioSaavn, making it the largest music streaming service in India with 100 Mn+ monthly active users (MAUs). The company has 900+ label partnerships including Universal, Sony, T-Series, Tips, YRF, Saregama and Warner Music. In addition to 60 million+ tracks in 18 languages, JioSaavn also offers users the option of accessing the app in six regional Indian languages as part of the streaming service's ongoing regionalisation efforts.

OPPO is a leading global smart device brand. Since the launch of its first mobile phone - “Smiley Face” - in 2008, OPPO has been in relentless pursuit of the perfect synergy of aesthetic satisfaction and innovative technology. Today, OPPO provides a wide range of smart devices spearheaded by the Find and Reno series. Beyond devices, OPPO provides its users with the ColorOS operating system and internet services like OPPO Cloud and OPPO+. OPPO operates in more than 40 countries and regions, with 6 Research Institutes and 5 R&D Centres worldwide, as well as an International Design Center in London. More than 40,000 of OPPO's employees are dedicated to creating a better life for customers around the world. OPPO’s Hyderabad R&D center is the largest research center outside of China and is playing a pivotal role in innovation across fields including software, imaging, and communication network. Aimed at elevating the global 5G experience, the brand also launched its first overseas 5G innovation lab in Hyderabad. In line with its commitment to Make in India, OPPO has a manufacturing plant at Greater Noida, established in 2016. As per International Data Corporation’s (IDC) Quarterly Mobile Phone Tracker, OPPO witnessed a growth of 35% YoY in 1Q 21.