1 Million Cases In Sales - Seagram’s 100 Pipers Becomes The First & Only Scotch Brand In India To Smash The Record, Yet Again 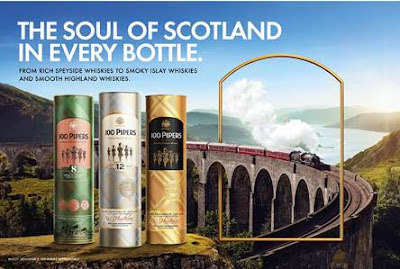 It has proven itself to be a market leader, thought leader & an innovation leader. In the last business cycle, Jul’20 - Jun’21, 100 Pipers has broken not one but two records.

100 Pipers became the first & only Scotch brand in India to cross 1 Million+ cases mark in annual sales, twice - a solid stamp on the consumers’ love for the brand.

Adding to this success streak, the brand’s premium variant ‘100 Pipers Blended Scotch, Aged 12 years’ crossed 100,000 Cases in annual sales for the first time ever since its launch in 2012.  A notable performance by the aged variant – it is now the largest selling 12 Year Old Scotch in India, confirming that “Age Matters” to the discerning Indian scotch afficionado.

Asserting its dominance in the Scotch whisky market, the brand had recently launched a new variant ‘100 Pipers Blended Malt Scotch, Aged 8 Years’. This is the first & only ‘100% Malt’ Scotch offering in the Standard Scotch category – a game changing innovation by 100 Pipers.

With a global footprint spanning 8 countries across Asia, Europe, Africa, Middle East & South America, 100 Pipers brings a truly international experience to the Indian consumers, with the widest range of unique Scotch variants. It is also the 2nd largest Scotch whisky in Asia.

Commenting on the multiple achievements, Kartik Mohindra, Chief Marketing Officer, Pernod Ricard India said, “100 Pipers continues to shape the Indian Scotch segment & set new records. This is driven by its increased popularity among the younger, aspirational consumers who are resonating strongly with the brand’s purpose-led initiatives due to their uniqueness, authenticity & credibility.

Like, the international award-winning Legacy Project – which showcases endangered Indian artforms via Limited Edition Packs & provides tangible livelihood support to artisans. Recognized internationally & in India by some of the most prestigious awards in the world for creative excellence, The Legacy Project won the Bronze Pencil at One Show Awards (New York), Merit at D&AD Awards (UK), Bronze at Spikes Asia and multiple honours at Kyoorius Creative Awards.

Also, the 100 Pipers Play for a Cause platform that has been leveraging music for many years to raise awareness & funds for various social causes like meals for underprivileged, flood relief, etc. in addition to supporting the partnering musicians.

In addition to trend-setting campaigns, the young, aspirational consumers have also taken well to the newly launched 100 Pipers Blended Malt Scotch, Aged 8 Years. This category-first 100% Malt Scotch seeks to give younger consumers a unique experience that welcomes them into the world of Malt Scotch. With the discerning consumer increasingly experimenting with Malts, this eclectic and premium scotch, showcases its craftsmanship and heritage that dates back to decades of scotch whisky making.

Overall, our strong performance over the years is a testament to great product craftsmanship, category first innovations, our differentiated & aspirational brand communication and purpose led initiatives – all coming together to help us build greater stature esp. amongst the younger consumers.”

As the largest whisky market in the world, India’s scotch segment continues to be highly aspirational for whisky consumers. With sales hitting bigger benchmarks across variants and a keen eye on leading innovation, Seagram's 100 Pipers is poised to continue as the dominant force in the market.

Posted by editor-manu-sharma at 5:00 PM