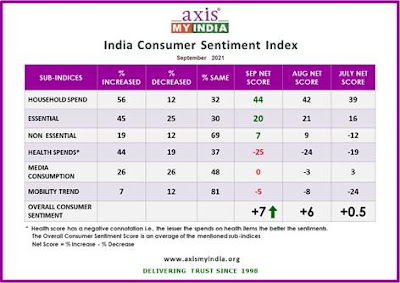 * 40% Of Indians Have Watched IPL At Least Once This Season, 31% Of Those Watched Have Viewed It On A Digital Platform (OTT)

* 40% of India has watched IPL atleast once, 31% of those watched have viewed it on a digital platform.

* 33% are buying electronics online while high value items like jewellery; and groceries, are still bought physically

* 27% have increased their usage of UPI/wallet payments, 49% still don’t use it

Axis My India, a leading consumer data intelligence company, released its findings of the India Consumer Sentiment Index (CSI), a monthly analysis of consumer perception on a wide range of issues, for the month of September.

The net CSI score, calculated by percentage increase minus percentage decrease in sentiment, was recorded at +7, rising at a constant pace over the last three months, indicative of a positive shift in consumer consumption metrics.

The surveys were carried out via Computer Aided Telephonic Interviews with a sample size of 10639 people. 59% belonged from Rural India while 41% belonged from urban counterparts covering 28 states and 8 union territories.

Commenting on the September report, Pradeep Gupta, CMD, Axis My India, said, “As the pandemic retreats, we are seeing a steady return to normalcy, but with a cautious control over spending considerations. This is highlighted in the survey as 46% of the respondents will prefer spending on small ticket items such as clothes, while only 11% of the respondents will consider buying a two-wheeler or car. Expenditure on household essentials is more or less same since the last two months. However, expenditure on healthcare decreased compared to last month, suggesting people are being decreasingly affected by the pandemic. While 27% respondents reported an increase in UPI transactions, almost 49% still don’t use UPI/Wallets, suggesting a tremendous opportunity in digital payments. IPL has proved its unparalleled reach and what is emerging as a trend is that audiences are increasingly viewing it on digital especially in tier 3/rural markets which still have electricity cuts & are single TV households."

* Overall household spending has increased for 56% of families which is same as last month.

* The spends increase on essentials like personal & household care is at 45%. The net score is almost the same as last month which is at +20.

* Spends on non-essential & discretionary products like AC, Car, Refrigerator increased for 19% of families. This increase is highest in North & East whereas the increase in South is only 8%. This increase still reflects an overall decrease by 2 percentage points from the previous month which stood at 21%. This can also be because 20th Sep – 6th Oct is considered the ‘Shradh period’ when high value purchases are postponed. The non-essentials September net score is at +7.

* Health continues to be an important consideration, with consumption on health-related items being increased for 44% of families and decreased only for 19% families. The health score which has a negative connotation i.e. the lesser the spends on health items the better the sentiments, has a net score value of -25.

* Consumption of media reflects increase for 26% families, with an increase of 1 percentage point over last month & consumption remained same for 48%. Net score has improved from -3 last month to the base value of 0 this month.

* Constant improvement in mobility net score is being recorded since past three months which indicates a steady return to normalcy.  In terms of mobility 88% families are saying they are going out the same or more on short vacations/mall/restaurants, with the overall mobility score is at -5 which is an improvement over last month which was at -8. This reflects a slight progress in people’s sentiments in terms of conducting outside activities.

* When asked on shopping plans for Dusshera/Diwali, 46% of families said they will shop clothes while only 11% intend to buy a 4-wheeler or a 2-wheeler. More than 88% of the families denied any interest in buying white goods (AC, TV, Washing Machine, and Refrigerator) or jewellery this festive season. In addition, 92% showcased negative sentiment towards buying home, plot, or a commercial property. The consumer sentiment for the month also reflects that 76% of the families will use their personal savings for making these purchases while only 21% would prefer taking loan from the bank or financial companies. This gives an indication that while buying spirit is moderate this festive season, the ticket size for purchase still remains small reflecting a cautious spending behaviour without denting one’s personal savings.

* In terms of online shopping behaviours 33% are buying electronics like laptop, mobile etc. online while high value items like jewellery and groceries (fresh food, rice, oil and meat) are still bought physically, indicating the view of 90% and 92% of the consumers respectively. Furthermore, banking and investment behaviour reflect a combination of both offline and online hybrid behaviour standing at 19%.

* Reflecting a transformation in consumer payment behaviour in the post-covid period, 27% have said that they have increased their usage of UPI/wallet payments (Paytm/Phonepe, Google Pay) while 49% still don’t use these online transaction mediums. Interestingly the increase in usage of UPI payments is gradually decreased with increase in age of respondents. The increase is highest for the age group of 18-25 years which is at 36%.