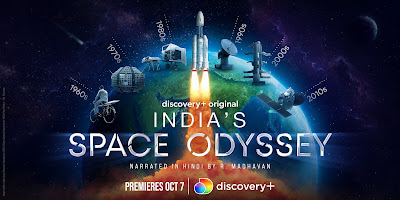 discovery+, country’s first and leading aggregated infotainment streaming platform famously known for engrossing cosmology content among other fun and facts-based content from more than 55 sub-genres is back this space week with an all-new original titled India’s Space Odyssey. This engrossing documentary premiering on 7th October 2021 only on discovery+ celebrates the 60 year long successful journey of India’s space programme. Narrated in Hindi by the versatile Indian cinema actor and space enthusiast R. Madhavan, the documentary captures the landmark endeavours achieved during India’s Space Programme which helps understand the tough circumstances under which ISRO succeeded, a victory considered impossible by some around the world. The journey was commenced by Dr. Homi J. Bhabha and Dr. Vikram Sarabhai on India’s quest to become a leader in space exploration and pioneering space technology.

Produced by Miditech Studios, ‘India’s Space Odyssey’ features different experts from ISRO as well as space historians & researchers and most notably, the former Chairman of ISRO, Dr. G. Madhavan Nair. Experts speak about their challenging yet wholesome journey working in the India’s Space Programme. The film documents how India decided to go to space with the visionary Dr. Vikram Sarabhai, the founding father of the Indian Space Programme at the helm. The documentary highlights the foundation setup by Homi J. Bhabha and Vikram Sarabhai who guided ISRO in upholding its mission of bringing the benefits of space to the service of the nation, making it one of the most decorated and largest space agencies in the world. Successors of the same vision were the Former President of India, Dr. APJ Abdul Kalam, Prof. Satish Dhawan and Dr. G Madhavan Nair, some of the scientists responsible for successfully steering India into an era of rapid space exploration and technology development, taking off with the SLV3, India’s first individual rocket launch Vehicle.

Using a combination of expert interviews, archive footage and graphic representations this special documentary captures the journey so far and further highlights India’s most revolutionizing space developments with the highly complex Chandraayan and Mangalyaan missions. With historical advances in India’s rocket technology, ISRO then proceeded to develop different technologies from the Polar Satellite Launch Vehicle (PSLV) which recorded a remarkable success rate of 95% and is the workhorse of ISRO’s satellite launch programme; to the most ambitious and historical Gaganyaan Programme, which will be India’s first manned mission to space. The documentary takes the audience through the ambitious, struggle and daring Indian Space Programme which with each mission expands India’s presence in space and humanity’s knowledge of the universe.

“The Indian Space programme since its inception has achieved significant feats, thanks to the contributions of all the people who have worked alongside the programme. We are delighted that a platform like Discovery has been taking these initiatives to the people in an attempt to encourage and inspire them.” said Dr. K. Sivan, Chairman ISRO, Secretary DOS.

R. Madhavan on narrating ‘India’s Space Odyssey’ said “Curiosity has brought humans to where we are today, and it will continue to do so. I thank Discovery India for this wonderful learning opportunity, and I feel honored to have lent my voice to a project that could inspire future generations to embark on their quest to explore space”.

At Discovery, we focus on exploring content that will give the audience an enriching and inspiring experience. Discovery is invested in being a worldwide leader of original edutainment with an immersive range of space-related documentaries and is now bringing to you a detailed and truly inspirational documentary on the much-appreciated Indian Space Programme. We believe ‘India’s Space Odyssey’ will delight Discovery fans and draw in all the space enthusiasts from across the country who are looking to satisfy their curiosity.” said Sai Abhishek, Original Content Head- South Asia, Discovery Inc.

‘discovery+’ is an exciting new D2C streaming app, launched to satiate the unmet need of a differentiated product offering premium real-life entertainment. Priced competitively with an introductory offer of INR 299 per annum, the app has been developed and curated specifically for India. discovery+ offers thousands of hours of exclusive content across 55+ genres, including Science, Adventure, Food and Lifestyle, in 7 languages including Hindi, English, Tamil, Telugu, Malayalam, Kannada and Bengali. The premium subscribers have access to a vast selection of never-seen-before Premium Discovery titles, must-watch documentaries, India originals and exclusive acquisitions. Free users of the app have access to all-time favorites from the Discovery library.

Posted by editor-manu-sharma at 12:03 PM