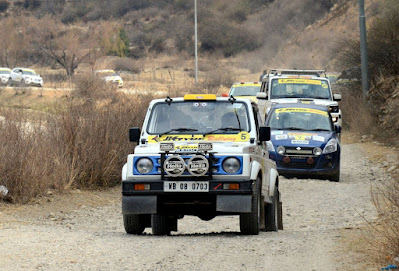 JK Tyre, India’s leading tyre manufacturer and pioneer of motorsports in India, has launched JK Tyre FMSCI Indian National Regularity Run Championship, the first-of-its-kind motorsport Nationals that is expected to provide a platform for driving enthusiasts to start their journey into professional rallying.

Ever since the Company got involved in Motorsports, the sole purpose has been to promote, nurture and provide opportunities from grassroots level to the highest echelons of motorsport to enthusiasts. The company has also invested in putting together a step by step motorsport program for budding racers who are interested in taking up motorsport as a career. JK Tyre introduced karting in India that is now the breeding ground for professional racing. Similarly, the JK Tyre FMSCI Indian National Regularity Run Championship will provide the necessary platform for entry into professional rallying.

Run under the aegis of Federation of Motorsport Clubs of India (FMSCI), and backed by JK Tyre the Indian National Regularity Run will be held across 17 cities in the country making it one of the most awaited National Championship of the year with biggest geographical spread.

Speaking on the occasion Mr. Sanjay Sharma, Head-Motorsport, JK Tyre said, “Promoting motorsports at the grass-root level in India has always been a key priority for JK Tyre. Our idea endeavors to create an eco-system and provide opportunities to motorsport buffs, as always. By launching the JK Tyre FMSCI India National Regularity Run National Championship, we hope to nurture the new generation of rally enthusiasts to get into professional rallying. Our activities and initiatives in the past few years have further strengthened our leadership position in Indian National Rally Championship and we continue our commitment towards building more professional rally drivers.”

Regularity Run is a form of TSD rally, usually conducted on public roads, both clean tarmac and flat dirt tracks which need precise time and average speed on various segments of pre-defined but undisclosed route. Each team comprises of a driver and a navigator will start the run at a fixed interval creating a field that is spread along the route with undisclosed Time Controls. The team with minimum time penalties will win. INRRC will have a Championship Class that will see National champions for 2021, one Navigator, a Driver and the team.

The zonal qualifiers will start on October 1, with the Rally of Bangalore, the first of the five South Zone events while Rally of Chamba, will kick start the other zonal rounds. Another five rounds are scheduled in the East, three in the West and one Central round would complement the North Zone event. The first South Zone round will be flagged off at 8 am at Kanteerava Stadium, in the busy downtown area and travel to the heritage Hampi city in Vijayanagar district. A 10-km run of over 40 vintage cars in the heart of the city are expected to enthrall and popularise the sport among the youngsters.

The final round of INRRC will be the JK Tyre Tri Nation Himalayan Drive in Siliguri which is the biggest motorsport event in Eastern India that traverses through the picturesque regions of Darjeeling, Sikkim, crossing Nepal and culminating at the enigmatic kingdom of Bhutan.

Posted by editor-manu-sharma at 8:02 PM