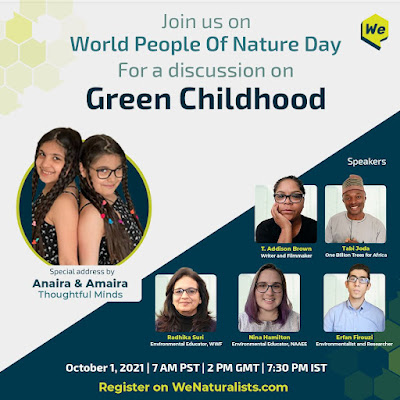 * The event, to be held on October 1, will recognize eight global heroes – individuals and organizations alike - who have played an instrumental role in preserving the environment

In a bid to preserve the environment, we continue to see champions who put their best foot forward and contribute to a nature-positive world. Connecting these people of nature across the world and bringing them closer, October 1 is all set to be celebrated as World People of Nature Day for the very first time. The day initiated by WeNaturalists is an effort to give long-overdue honor to people who work endlessly to raise awareness and save the environment. The occasion will also honour eight global personalities who are leaving no stone unturned towards ensuring a habitable planet at the upcoming WeNaturalists People of Nature Awards.

The first edition of the awards will recognize the impact these eight winners have made across the categories of - Storyteller With a purpose; Climate Change Voice; Nature Conservation; Environmental Educator; Nature Positive Innovation& Special Contribution to Green Childhood. The Young Achiever category will also have three winners.

The day seeks to recognize and honor the people working to improve their local communities, wild spaces, and the world by creating solutions that transform lives and drive nature-positive solutions. “While we celebrate nature every day, October 1 was chosen to be the day where we honor the unsung heroes who are giving direction to the natural world and are an inspiration to others,” said Amit Banka, Founder of WeNaturalists.

The date was chosen to coincide with the day that WeNaturalistswas born. “We created this technology-enabled ecosystem with the belief that if the planet is to thrive, we need to empower nature lovers and give them the tools to help them reach their visions,” said Banka.

“With nature playing a big role, much of our learning/insights came from the people and environment around us,” said Banka. “We believe the next generation is poised to play an important role in shaping our future world, be it the food that we eat, the air we breathe, and the land we will walk upon.”

The Green Childhood webinar and award ceremony is open to the public.