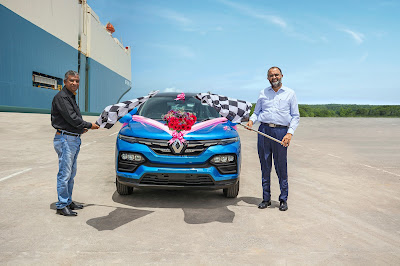 * KIGER exports already started to Nepal; Will further expand exports of KIGER to Indonesia, other parts of Africa and SAARC region soon

Renault India has commenced exports of its sub-4 metre compact SUV Renault KIGER to South Africa. Developed and produced in India, for Indian customers first, before taking it globally, Renault KIGER is the latest in the line of revolutionary products launched by Renault in India, that has established itself as a Stunning, Smart and Sporty B-SUV.

Mr. Venkatram Mamillapalle, Country CEO & Managing Director, Renault India Operations said, “With the launch of Renault KIGER, Renault forayed in the largest and the fastest growing segment of the Indian automobile market.The commencement of Kiger exports to South Africa today and Nepal earlier this month highlights Renault’s strong commitment to the ‘Make in India’ mission, demonstrating the competence of India’s design, engineering and world class manufacturing capabilities. Renault’s diverse range of offerings in passenger vehicles has been consistently well-received by the people of South Africa. Our latest offering Renault KIGER will further bolster our existing portfolio in the country with its distinctive SUV look, great space, smart features and world-class sporty engine.”

“We look forward expand the exports of KIGER to many international markets soon including Indonesia, other parts of Africa and SAARC region, along with growing our customer base in India,” he added.

Loaded with several smart attributes and powered by a sporty, world-class turbocharged 1.0L petrol engine, Renault KIGER is a breakthrough product targeted at the core of Indian’s automotive market. The Stunning design of Renault KIGER is exemplified by a host of sporty and muscular elements which make Renault KIGER stand out as a true SUV. On the inside, Renault KIGER’s Smart cabin combines technology, functionality and roominess. Renault KIGER is powered by a new turbocharged 1.0L petrol engine for more performance and driving pleasure. This high performance, modern and efficient engine ensures a Sporty drive and is complemented by multi sense drive modes which offer the flexibility to best suit the customers driving preferences.

Renault has introduced innovative ways of reaching out to customers. The Renault KIGER Virtual Studio is a state-of-the-art virtual studio which enables 360 degree views in seamless fashion and allows the customers to configure, accessorise and make online bookings. It is an overall customised consumer journey which allows complete access to information and customisation on Renault KIGER. Renault KIGER is offered in two engine options 1.0L Energy and 1.0L Turbo with 2 pedal offerings on each of the engines.

Together with its product portfolio expansion strategy to drive volumes in India, Renault is substantially increasing its network reach in India and introducing several unique and pioneering initiatives to ensure that customers’ have an unparalleled association with the Renault brand. Currently, Renault India has more than 500 sales and service touchpoints in India, which include 200+ Workshop On Wheels locations across the country

Posted by editor-manu-sharma at 7:02 PM