Uncover The Truth About Indian History With Its Documentary Secrets Of Sinauli: Discovery Of The Century 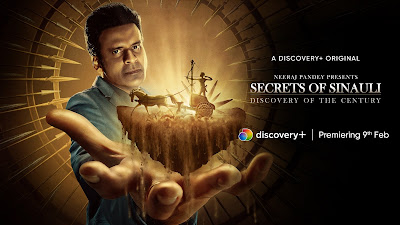 In collaboration with Archaeological Survey of India, the documentary unearths the secrets buried for more than 4000 years; findings include 3 ancient Chariots, Copper weapons and warrior burials among other significant artifacts that through light on ancient Indian culture

Experts, Historians reveal how this discovery will correct Indian history which was being twisted by Western Countries

The Sanskrit Shloka acknowledges that time is eternal and no one or nothing can escape the process of time. Setting the tone perfect for discovery+ ’s upcoming historical documentary that goes over a secret buried in time, only to be uncovered by time again. discovery+, India’s first and leading aggregated real-life entertainment streaming app, in collaboration with Archaeological Survey of India (ASI), is all set to launch one of the most historically relevant documentaries of the century, titled ‘Secrets of Sinauli: Discovery of the Century’ on 9th February 2021.

Acclaimed Bollywood director Neeraj Pandey and Friday Storytellers present their first ever documentary, narrated by the very versatile National Awards winning Indian film actor Manoj Bajpayee, ‘Secrets of Sinauli: Discovery of the Century’ uncovers the mysteries behind the excavations in the town of Sinauli. The documentary directed by Raghav Jairath from Friday Storytellers, covers the timeline of the finds, the artefacts themselves and the people involved across each stage of the discovery.

An archaeological site- Sinauli, located in Baghpat district, western Uttar Pradesh, India is reported to be the largest necropolis of the Chalcolithic period (between 2000 BC and 700 BC) in India. The documentary, beautifully going over the discoveries made during the excavation at Sinauli, presents the 4000-year old Chariot, Copper weapons and warrior burials. The chariots are encased in copper and are believed to be the oldest surviving physical evidence of the chariot ever to be discovered in the world. Alongside, there are also shields, bows and arrows, spears, swords, helmets, axes and other copper weaponry that have been unearthed from the burial sites.

Why were the swords kept in burials? Did Western countries twist Indian History? Who were the people connected to these swords and Chariots? Raising many theories and questions about wars in ancient India, ‘Secrets of Sinauli: Discovery of the Century’ features experts, some from the Archaeological Survey of India, as historians and archeologists revisit the historicity of the mythology and re-imagine the timeline of history. This significant discovery, using latest technology at Sinauli, will right the many misconceptions about our country’s history.

“Secrets of Sinauli: Discovery of the Century is a blend of history, science, technology and mythology. India is a country known for its rich culture and varied heritage. Exploring and unearthing new facts of our history is precisely what excited me about this project” said Neeraj Pandey. “Discovery is known to provide its audience rich, relevant and varied content accurately. We are glad to tell a significant story, although it's not yet concluded, and we look to its continuation through discovery+.” he adds.

Manoj Bajpayee said, “History often gets interpreted in different ways through time, hence, important discoveries like that of Sinauli help us understand our past and our culture better.” He adds, “The opportunity of hosting Secrets of Sinauli: Discovery of the Century has been a unique and a learning experience for me, and for that, I am truly thankful to discovery+ and Neeraj Pandey’s Friday Storytellers. The documentary makes some historic revelations over the discoveries of the significant ancient chariots and different artefacts at the excavation that belong to a period of India that is very highly regarded.”

“Discovery of this ancient civilization at Sinauli is a captivating story that needs to be seen and heard across our nation. Our latest original probes some of the most significant revelations about our rich and glorious history. Secrets of Sinauli: Discovery of the Century will enlighten our viewers and take them on a journey of Indian history that’s never been told before,” said Issac John Direct-to consumer Head APAC-Discovery.

Watch Secrets of Sinauli: Discovery of the Century, 9th February onwards on discovery+

‘discovery+’ is an exciting new D2C streaming app, launched to satiate the unmet need of a differentiated product offering premium real-life entertainment. Priced competitively with an introductory offer of INR 299 per annum, the app has been developed and curated specifically for India.  discovery+ offers thousands of hours of exclusive content across 40+ genres, including Science, Adventure, Food and Lifestyle, in 8 languages including Hindi, English, Tamil, Telugu, Malayalam, Kannada, Bengali & Marathi.  The premium subscribers have access to a large selection of never-seen-before Premium Discovery titles, must-watch documentaries, India originals and exclusive acquisitions. Free users of the app have access to all-time favorites from the Discovery library.

Posted by editor-manu-sharma at 3:47 PM