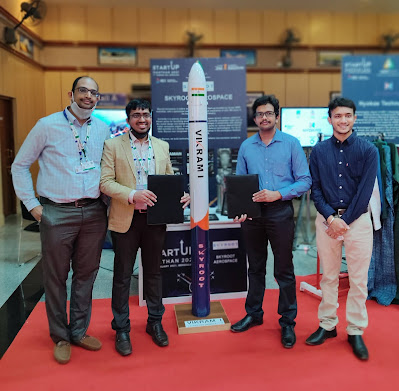 Skyroot Aerospace and Bellatrix Aerospace, who had both won this year’s National Startup Award under launch vehicles and satellite categories respectively. After ISRO and Government of India promised its support to private space companies through creation of IN-SPACE and announcement of new space law, Indian space companies have started to take bold steps and this is among the first contracts between Indian space startups in that direction.

Skyroot and Bellatrix entered into a Memorandum of Understanding (MoU) to use the Orbital Transfer Vehicle being developed by Bellatrix Aerospace in the upper stage of Vikram series of launch vehicles being developed by Skyroot. An Orbital Transfer Vehicle is a spacecraft that can perform various in-orbit operations including deployment of customer payload to precise orbits, thus allowing a launch vehicle to deliver satellites to more orbits than what was conventionally possible. In simple terms, it is like a taxi in space to take satellites to their operational orbits. Skyroot and Bellatrix plan to have the first mission of a Vikram launcher with an Orbital Transfer Vehicle by 2023.

Bellatrix Aerospace, an IP driven space tech company founded in 2015, is a full-suite solution provider of spacecraft propulsion systems based in Bangalore, India offering both chemical and electric propulsion technologies. Currently, Bellatrix is expanding its business towards developing Orbital Transfer Vehicles based on its advanced propulsion technologies for precise orbital insertion of satellites and also becoming prime contractor for developing and operating unconventional satellite platforms for highly demanding and complex mission requirements.

Naga Bharath Daka, COO & Co-Founder at Skyroot Aerospace, said, “We are elated to partner with Bellatrix Aerospace, to use their Orbital Transfer Vehicle with our Vikram series of launch vehicles. This gives us additional boost to our launch capabilities to meet specialized customer requirements”

Pawan Kumar Chandana, CEO & Co-founder, said, “We believe collaboration among our own startups can offer very competitive solutions from India for the world. We have also partnered earlier with Dhruva Space”

Speaking about this partnership, Mr Rohan Muralidhar, CEO of Bellatrix Aerospace said, “We are confident that this partnership will help us serve complex mission requirements and at the same time reduce the cost of access to space. The increasing demand for timely satellite constellation deployment in different orbits and on rideshare missions has not only made Orbital Transfer Vehicles (OTV) attractive, but also necessary. We are happy

Posted by editor-manu-sharma at 3:51 PM