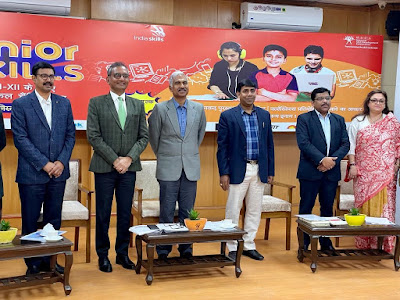 Championship to give an impetus to Skill India Mission, and integrate skilling at an early age

* Students can register at https://worldskillsindia.co.in/JuniorSkills2021

* Open to CBSE students from class VI to XII

* The prizes include cash rewards, certificates, tech-aid tools, and more.  Top 21 students will get an opportunity to travel to WorldSkills International

With an objective to enhance integration of technical and vocational education (TVET) at the school-level, National Skill Development Corporation (NSDC), in collaboration with Central Board of Secondary Education (CBSE), today announced the launch of the first edition of JuniorSkills Championship 2021. The championship shares the values and objectives of the Skill India Mission, emphasizing technical and vocational skill training and capacity building for creating a productive and self-reliant workforce as a part of nation building.

Leveraging its experience and expertise of leading India’s participation at WorldSkills International competitions since 2011, NSDC, through this initiative, aims to create wider awareness about the importance of skill development amongst the youth of the country at an early age. The championship, to be held virtually this year, will provide students an opportunity to identify their talent and interests and make informed career choices in a rapidly changing world. The registration for JuniorSkills will be open till 19th February 2021.

The championship will be promoted through nearly 21,000+ CBSE-affiliated schools across India. Targeted at students studying in standard 6th to 12th across the country, the JuniorSkills Championship 2021 will provide a platform for talented children of India to showcase their skills. At the same time, it will create a pipeline for the forthcoming WorldSkills Competitions and will connect education with industry-related skills. Further, the championship will also assimilate international standards and assessment norms, build capacity of teachers as per WorldSkills standards, create role models among students and make skills aspirational for youth. The championship will have myriad activities planned over the course of the next two months including skill competitions for schools, career counselling webinars, digital seminars and panel discussions, online boot camps and roundtable conference of academicians and corporates leading to the final national competition to be held in April 2021.

Ministry of Skill Development and Entrepreneurship lauded the initiative and asserted that the introduction of skill training at school level will certainly play a pivotal role in providing lifelong learning opportunities to the children and enhance their prospects of sustainable livelihood in future. Under the Skill India Mission, we have reinforced our efforts towards integrating skills at an early age in line with the National Education Policy 2020. As we continue the journey of making India the ‘Skill Capital of the World’, now is the time to commence initiatives from schools, to build the right knowledge, awareness and skill sets from the foundational years.

National Skill Development Corporation emphasized that the JuniorSkills Championship will make the   children aware of the power of vocational education and its positive impact on career in the long run. The championship will contribute towards making skills truly aspirational for youth.

Central Board of Secondary Education (CBSE) shared that the board aims to make skills and vocational training an integral part of the education.  Our collaboration with NSDC to launch JuniorSkills Championship is aimed at creating a platform that will expose children to limitless career opportunities via skill development.  It will encourage students to discover their inherent capabilities and shape their careers from an early age. At the same time, it will help us empower teachers to integrate skill development at school level to train an agile workforce for jobs in future.

JuniorSkills Championship 2021 has got support from private partners such as ICICI Bank as an event partner, Qrencia – a technology partner and Pearl Academy, which is to function as an academic skill partner. Other skill partners include the National Film Development Corporation (NFDC), Smalt & Beryl, D-Link, the Small Industry Development Bank of India (SIDBI), the Skill Council for Green Jobs (SCGJ), the Delhi School of Photography (DSP), and Holosuit. Jagran Josh and Amar Ujala have also come on board as media partners, and i-Skill Junior as an outreach partner.

The championship has been envisioned in accordance with the latest National Education Policy 2020 wherein the emphasis has been laid upon the integration of vocational courses in schools. CBSE will play an important role in promoting and setting benchmarks for the skill competitions among schools affiliated with it.

•     Students from class 6th to 12th from CBSE affiliated schools can participate.

•     To apply for participation, fill ‘Registration Form’ on https://worldskillsindia.co.in/juniorSkills2021

•     For general information and queries, read FAQs on the portal.

•     Screening and selection will be done by National Skill Development Corporation.

National Skill Development Corporation, working under the aegis of Ministry of Skill Development & Entrepreneurship, is a unique public-private-partnership which aims to catalyze creation of quality vocational training ecosystem in India. Since inception in 2010, NSDC has trained more than 2.5 crore people through its partnership with 600+ training partners, 11,000+ training centers spread over 600+ districts across the country. NSDC has established 37 Sector Skill Councils and is implementing Government’s flagship skill development schemes such as Pradhan Mantri Kaushal Vikas Yojana (PMKVY), Pradhan Mantri Kaushal Kendra (PMKK), National Apprenticeship Promotion Scheme (NAPS), among others.

About India’s Participation at WorldSkills Competitions

NSDC has been leading the country's participation at the WorldSkills International competitions (equivalent of Olympic Games for Skills) since 2011. At WorldSkills Kazan 2019 India won one Gold, one Silver, two Bronze and fifteen Medallions of Excellence, finishing at 13th position, several notches up from the last time when it won 11 medals and finished in the 19th position at Abu Dhabi in 2017. Like the WorldSkills Competition, the IndiaSkills Competition is held every two years by NSDC in partnership with state governments and industries. Launching for the first time, JuniorSkills, an additional initiative by IndiaSkills, in partnership with Central Board of Secondary Education (CBSE), is another breakthrough for India in the skills competition front.

There are approximately 21,000+ schools in India and 220 schools in 28 foreign countries affiliated to the Central Board of Secondary Education (CBSE). Their contribution through direct and indirect participation can create value for skills, making them more aspirational, the training more interactive, practical, and accessible. JuniorSkills underscores the CBSE’s focus on innovations in teaching-learning methodologies   by devising student friendly and student-centred paradigms, and skill learning by adding job-oriented and job-linked inputs, among other things. It is part of a holistic approach to education, that stresses the more practical aspects of learning and plying a skill; the process allows for students to assess their own interest and competency in a particular skill. It may also give them a sense of whether they would like to seek a career in the same field.

Posted by editor-manu-sharma at 12:54 PM