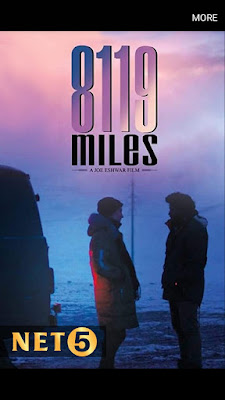 Miles is a captivating film of Gabriel D’Selva, a mechanic from Goa, and his companion Anil Nair, the two struggling immigrants to reach their destination – the United Kingdom. A thrilling story by Liverpool based Indian film-maker Joe Eswar and his team of the unusual journey through the infamous 8119 Miles with pit stops that include Ulaanbator in Mongolia, Atrau in Khazakstan, Istanbul and Erzurum in Turkey, Sofia in Bulgaria, Cologne in Germany, Belgium and finally the UK.

Releasing exclusively on Net5 an OTT platform on February 5th, 8119 Miles, as its title suggests is a road movie, shot in several countries. Gabriel’s life’s greatest ambition is to travel to the UK. He tries several times to secure a visa but gets refused. Desperation leads him to find a travel agent who is also an illegal immigration specialist- Ram Kumar. Mr Kumar organises Gabriel’s journey across an old route used by Illegal Immigrants in the 80s to travel from Asia to Europe. As the adventure begins, Gabriel gets a new companion, a bankrupt film producer who’s trying to flee from his debtors- Anil Nair. The Duos journey shapes up from the coast of Goa through the Mongolian Steppe through the Silk Roads of Central Asia through the oblasts of Russia to Joseph Stalin’s Georgia. From Georgia, the story evolves through Ottoman Turkey and spreads its wings across Europe. Cultures, ideas and concepts are all incorporated into a journey that leads the protagonist Gabriel D’Selva and his companion Anil Nair through a road less taken these days. The reason for Gabriel’s journey is the suspense of the film, and the outcome of his travel is yet another matter of curiosity to the audience. To watch the movie, download the Net5 App from Google Playstore or Applestore & its also available on www.net5.in

Posted by editor-manu-sharma at 8:33 PM