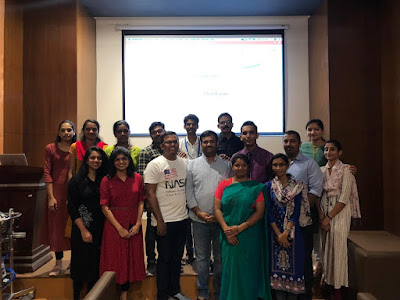 Department of Critical Care at Manipal Hospitals Whitefield  organised a Ecmo basic workshop . Didactic lectures on various topics related to care of ECMO patients and hands on workshop was conducted.

The workshop witnessed several delegates particpating at the event from across specialities like Intensivists, training fellows, critical care nurses and perfusionists. Dr. Rajesh Mohan Shetty, Dr.Rajavardhan R, Dr. Manjunath T and Dr. Nithya CA , consultants critical care, Manipal Hospitals Whitefield. The ECMO survivors too participated in the workshop and shared their experience of timely use of ECMO successed in saving their lives at Manipal Hospitals Whitefield.

Dr. Rajesh Mohan Shetty, Consultant Critical Care at Manipal Hospitals Whitefield said, “Extra Corporeal Membrane Oxygenation (ECMO) is a boon in the form of a machine which acts as a heart – lung bypass. It can support and perform the functions of the lung and the heart, individually and together. The ECMO circuit acts as an artificial heart and lung for the patient during ECMO therapy. It is important to be aware of the usefulness of ECMO for health professionals as well as families.”

Dr. Rajavardhan R, Consultant Critical Care at Manipal Hospitals Whitefield said, “ We had 3 cases who were extremely critical and the timely use of ECMO was helpful in saving their lives. The first case was of Mr. Murugan a 50-year male civil contractor who was admitted with severe fever, cough and breathing difficulty. Initially, he was treated with antibiotics, flu medicine (oseltamivir) and oxygen. Because of increasing breathing difficulty and decrease in the oxygen level, he was put on a ventilator. He was then put on resting lung ventilation and his kidneys had failed as well. When his condition improved, he was removed from ventilator and kidney function improved post dialysis .Initial few days he needed regular follow up with nephrology, plastic surgery team. He is now independent, doing his routine work.”

Dr. Nithya CA , consultants critical care, Manipal Hospitals Whitefield said, “ ECMO plays a very critical role and is a savior . We had Mrs.Lakshmamma, a 37-year-old female homemaker was referred from an outside hospital with a history of fever, cough and cold on 10/08/2019. Initially, she was treated with antibiotics, flu medicine(oseltamivir) and oxygen. Even on ventilator full support, her oxygen levels did not improve, the family was given the option of initiation of ECMO- family agreed for the same and she was initiated on ECMO. She was put on resting lung ventilation. Her condition gradually  and she was taken off the ventilator. Initial few days she required oxygen therapy, nebulization because of cough. Now she is independent doing all her routine, including taking her of kids.”

The third case was of Mr. Prashanth Kumar, a 34 year old who works with G4S secure solutions as assignment manager had come with complaints of fever, cough, and breathlessness on 20/12/2019. Initially, he was treated with antibiotics, flu medicine (oseltamivir) and oxygen. Even on ventilator full support, his oxygen levels did not improve, the family was given the option of initiation of ECMO- family agreed for the same and he was initiated on ECMO. He was put on resting lung ventilation. However, he was weaned off ECMO but he was discharged with oxygen to home. He longer requires oxygen now.
Posted by editor-manu-sharma at 2:48 PM