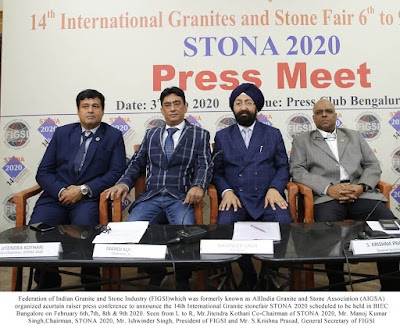 The sole object of the Federation is to promote natural stone industry of India across the globe and to resolve the issues faced by the Natural Stone Industry.

India is a country which is endowed with high quality natural stones like granite, marble, sandstone, slate, limestone and quartzite etc that are widespread in every corner of the nation. India has more than 11% export share in total world's stone trade. Indian share is more than 27% of the total stones produced throughout the world. India is recognized as one of the largest dimensional block producer in the world. Indian slabs, tiles, and monuments are supplied to more than 90 countries. Presently, stone industry is recognized as one of the fastest growing mineral industry in boosting the Indian economy and providing large employment opportunity in the rural sector after Agriculture.

Achievements of the Federation:

a)  Formation of Granite Development council by Government of India
b)  Formation of Group on Marble development by Government of India
c) The Granite conservation and Development rules 1999 for Granite Development was framed by Central Government for the entire country.
d) The marble conservation and development rules was framed for the development of Marble trade in India
e) Conducting of STONA fair from 1987onwards for promoting the Natural stone products in the domestic as well as international market (The export which was at Rs. 50 cr ores in 1987 has increased to Rs. 14,000 crores in 2016-17).
f) Participation in various fairs across the world to promote the Indian natural stones.
g) Impressed the Government  and has brought the marble blocks import under OGL scheme
h) Impressed the government to reduce the GST on polished slabs and tiles to 18% from 28%.
i) Now the federation is taking up the issue of GCDR which has been recommended by the sub-committee of GDC
j)  Taken up the issue of treating EOUs at par with the SEZs
The federation has lined up various programme for the development of the Stone Industry as follows

1) The Federation in joint venture with Chamrajnagar quarry owners association has installed an RO Water Treatment Plant in the village of Rechambally Chamrajnagar. The said RO plant has been donated to Kagalavadi Panchyat of Chamrajnagar district.

2) Where the mining/quarrying hub/ industries have come up in those areas for the benefit of the workers and for the nearby villages the ambulances have been donated for medical emergency in the area of Jigani, Anekal Taluk Karnataka  and Jalore in Rajasthan.

Following are the salient features of STONA 2020

STATUS OF THE INDUSTRY:-

India has the second largest deposit of Natural Stones in the world with 15% of the world Natural Stone reserves which is about 46.23 billion cubic meters. India is one of the top 5 Granite producing countries along with China, Brazil and others.
India is the largest producer of dimensional granite blocks (about 35 Million tonnes) major producing states are Andhra Pradesh, Telangana, Rajasthan, Karnataka, Tamilnadu, Uttar Pradesh, Odisha, Madhya Pradesh, Gujarat etc.
India stands in 3rd position in the Natural Stone trade in the world. The total No. of people employed in the Natural Stone trade in India is about 1.5 million.
Indian exports have crossed $2.2 Billions (14,000 Crores) in 2018.
India has adopted the latest technology in quarrying sector for cutting, drilling & handling, which has lead to improved production, less environmental damage and safe quarrying.
The latest technology of wire saw cutting,  circular saw cutting and breakage powders has lead to  zero blasting, thereby leading to safe working environment with less pollution yielding more production.
The Indian quarrying sector pays the highest royalty in the world i.e., we pay about 15%  on invoice value, where as the world average royalty is 3%. We now contribute a percentage on royalty towards DMF (district Mineral Fund) which is utilized for infrastructure development and for providing basic facilities like education, health, drinking water, sanitation, roads etc in the particular district where the quarrying takes place. Thereby improving the quality of life for local people living in the quarrying areas.All the States have supported the policy in fixing the percentage. For eg in Rajasthan, DMF is fixed at 10 percent on royalty, Andhra 12.5 percent on royalty and Karnataka have fixed at 30 percent on royalty. Similarly all the States have fixed between 10 percent to 30 percent.
The processing sector has developed very well in the last 10 years. The processing units have been setup  in almost all the districts where quarrying activities takes place, since it is  easy to procure the raw material. Of late, the processing industry are starving for want of raw materials. In order to support the processing industry more quarries are required to be granted by the govt.
Today, India is exporting more than 80% of the stone products in value added form to more than 90 countries all over the world.
Since the closure of most of the quarries in Tamilnadu and Karnataka due to the State Government policy decisions, the processing units are importing marble  under OGL and EOU’S are importing both marble and granite blocks to overcome the shortage of supplies.  The need of the hour is to allow free import of Granite also under OGL to mitigate the problem of shortage of raw material.

Long term quarry lease ranging from 30-50 years with guaranteed renewals. The support of the government by way of suggestion is that regarding the grant of mineral concessions on first – cum-first- served basis and not through auction. Presently, except the State of Telangana all other States have resorted to the auction policy. Therefore it requires to be revisited in framing the policy. The auction system does not suit the dimensional block as the mineral is natural in nature and recovery cannot be guaranteed. Natural Stones mining is mainly the production of blocks of considerable size and weight

Rajasthan model of royalty collection seems to be very practicable and other state governments may adopt this model with requisite modifications suitable to them. As a Federation, we too agree with the recommendation of IBM. This policy would end up in less corruption, and a drastic reduction in the illegal quarrying and transportation apart from earning more revenue to the State Exchequer.
Grant of quarry leases in a time bound manner as the States deem fit.
Import of granite blocks to be allowed freely which will add variety and will enable us to take up projects all over the world.
Reduce GST to 5% on blocks & 12% on slabs & Tiles.
The quarrying activities are in progress for the past 4 to 5 decades and largely quarrying activities are confined to smaller areas in extent. Pursuant to the order passed by Hon’ble Supreme Court of India the lesser extent quarries are covered by environment clearance. However, the conditions imposed in the environmental clearance are on par with the condition imposed for major minerals which is larger in extent. Therefore, there is a requirement of relaxation in conditions prescribed in environment clearance to suit the requirement of the smaller areas for better compliances.
The future of the quarrying industry would be there in disposing of the huge accumulation of wastes which is a major threat to environment. In this context the wastes can be constructively utilised not only as a value added product but also to meet the societal needs like prevention of coastal erosion, the aggregates, M-Sand as a replacement to natural river sand, for usage  in the road construction and other works on par with building materials. The waste should not be considered as a real waste but to be treated more sensibly as an asset as in the quarries which is seen abroad mostly in China with proper management.
Recovery  percentage for saleable blocks to be rationalized The percentage recovery of dimensional granite blocks on the whole is quite low and varies from 5% to 20% due to inconsistency in colour and texture, geological disturbances like hairline fractures/streaks, joint spacing, integration of mineral constituents along planes giving non-uniform pattern etc. Such limiting factors vary from place to place in a single quarry and quarry to quarry having the same rock formation.
The Status of Natural Stone Quarrying Sector to be declared as an Industry
CHALLENGES:-

With policy support, the industry can grow 10-15% annually.
Increase exports by 15-20%.
Investment  can go up to Rs 1 lakh crores from Present Rs 50,000 crores
Provide employment to additional 15 lakh skilled and semiskilled people in rural & semi urban areas.
Over a period of time natural stone will prove that they are superior compared to other competitive products.
For all this, measures require proper policy and government support. Long term mining/quarrying leases, fast processing of quarrying/mining applications, fixing of royalty rates at a reasonable level on par with the neighbouring states and countries, easing of environmental laws for better implementation required.
Posted by editor-manu-sharma at 7:06 PM