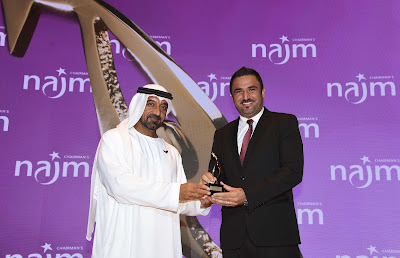 Emirates Group's 26 employees received the organisation’s most prestigious recognition at the Najm Chairman’s Awards held last week. The awards recognise employees whose work and actions are characterised by a strong work ethic, a spirit of innovation, extraordinary acts of bravery and selfless teamwork.

The winners included Morteza Monfared, an Emirates Customer Services Supervisor. He was boarding passengers for a flight from Dubai to Kochi, when a panic stricken family rushed towards the gate, crying that their child had become unresponsive. Morteza sprang into action, positioned the child on the floor and immediately performed CPR to help the child. By this time, the medical team had arrived on the scene and took over. Morteza’s quick thinking and prompt action resulted in saving the life of the child.

His Highness Sheikh Ahmed bin Saeed Al-Maktoum, Chairman and Chief Executive of Emirates Airline and Group, presented the coveted ‘Najm Chairman’s Award’ to six individual and team achievements at a ceremony that took place at Emirates Group Headquarters today. The ceremony was attended by hundreds of colleagues, as well as friends and families of the honourees, and streamed live to thousands of employees around the world. The winners also received a monetary award for their contributions.

Applauding the exceptional employees on their wins, HH Sheikh Ahmed said: “Our people are our greatest asset, and the Najm Chairman’s Awards honourees are a perfect example of how Emirates Group employees live the values of our organisation, and with their powerful passion and initiative help drive our business and reputational momentum forward. We are grateful for the example they set everyday in helping to make a difference for customers, for their fellow colleagues and for our businesses around the world through their dedication and commitment to excellence. Today, we celebrate their achievements and contributions which truly embody the Emirates Group’s can-do spirit.”

Najm, which means ‘star’ in Arabic, has been the Group’s employee recognition and reward programme since 2007. The Najm programme has different award tiers which recognises employees all year round for their excellence, commitment and innovation, and going above and beyond their roles to make a difference. This year, the Emirates Group recognised over 14,000 employee achievements through the programme.

Phenomenal Acts and Exceptional Initiatives
The Najm Chairman’s Award 2019/2020 winners were honoured across a range of extraordinary achievements - saving lives, dedicating their time to create innovative solutions for the business and operation, overcoming overwhelming challenges through teamwork, and delivering service excellence.

Going beyond the call of duty for a sick customer

Mohammed Imamuddin was doing his mailing rounds when he heard a colleague from Emergency Response Planning call out to him urgently. An elderly passenger, who was in transit to Dhaka, had just collapsed from a heart attack, and the colleague was attending to him. The passenger and his wife could only speak their own native Bangla. Mohammed immediately rushed to assist as a translator for the passenger and emergency services. However, his assistance to the sick passenger did not end there. Mohammed also used his personal time to visit the passenger at over the next 10 days of his recovery in Dubai. He helped to translate and communicate the passenger’s requests to the travel agency in Dhaka as well as other government agencies. He contacted the passenger’s family, and kept them updated on the passenger’s condition. Mohammed even took the time to prepare homemade Bangla dishes for the passenger. Mohammed’s generosity and care for this passenger went above and beyond his work responsibilities.

Omar Al-Samarrai, Mook Park, Giovanni Scalsi Riquelme and Andre Weidlich were recognised for the recovery work they led after an emergency diversion to Goose Bay Airport Newfoundland, Canada. Challenges mounted as the airport lacked the resources and facilities to cope with the large aircraft and volume of customers onboard. However, this did not deter the team who effectively managed the situation, and took care of customers. Buses were arranged to transport groups of passengers to the terminal and updates communicated on an ongoing basis until the replacement aircraft arrived. Despite several obstacles along the way, the flight deck and cabin crew’s teamwork was instrumental in delivering outstanding airmanship and decision making to ensure the comfort and safety of passengers.

To improve on-time aircraft turnarounds at the Dubai hub, a group of team members from Emirates Engineering, IT, Operations Research & Effectiveness, dnata Airport Operations, Flight Operations and Operations Control collaborated and worked with agility and tenacity to deliver an application that tracked turnaround activities in real time, proactively identifying causes for potential delays, which provided significant benefits to the airline’s operation and saved the company millions of dirhams.
Posted by editor-manu-sharma at 4:15 PM