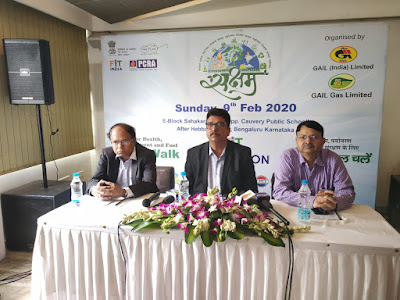 In its attempt to spread awareness around extensive fuel and energy consumption due to rapidly increasing industrialization, the Petroleum Conservation Research Association (PCRA) announced the launch of Saksham Walkathon initiative in Bengaluru today. The Saksham Walkathon is an awareness drive in association with GAIL (India) Limited and GAIL Gas Limited, to emphasize the need to cultivate the habit of walking for better individual health while also contributing towards greener environment, water and fuel conservation. The walkathon will start in the city on 9th of February 2020 from Sahakar Nagar.

Air pollution in India is a severe issue with vehicle emissions being a catalyst by contributing 27% of the overall pollution caused and leads to premature deaths of 2 million Indians every year due to hazardous air quality. In Bangalore alone, nearly 50% of children suffer from asthma and calls for immediate action by people to reduce traffic congestion. Congestion of traffic is one of most prevailing causes for increased pollution as it slows down average vehicle speed and increases inefficient fuel burning. Increased number of vehicles has led to a staggering increase in traffic congestion and hence residents of the city must cut down the usage of vehicles and utilize sustainable modes for everyday commute.

With the prime motto to promote walking as a medium for the conservation of natural resources, the drive aims to engage with people across India and instill socio-environmental consciousness in each individual and society at large.

Speaking at the inaugural ceremony of the initiative, Shri Vivek Wathodkar, Chief General Manager, GAIL Gas Limited, said “We are extremely delighted to be a part of Saksham Walkathon as it is a highly significant initiative by PCRA, in the era of evolving industrialization. GAIL Limited has been known in the country for not just delivering the best but also taking responsibility for sustainable growth for the masses. With this initiative we aim to bring more and more people under the umbrella of healthy and responsible lifestyle. We need people to come together with their family and friends and join us in our drive to lay the groundwork for a healthier life in turn building a stronger nation.”

Prior to this, PCRA recently organized a mega awareness cyclothon in 200 cities across the country to play a proactive role in fuel conservation and populate good health among people which in turn will also help in the reduction of India’s consumption of crude oil.
Posted by editor-manu-sharma at 7:11 PM