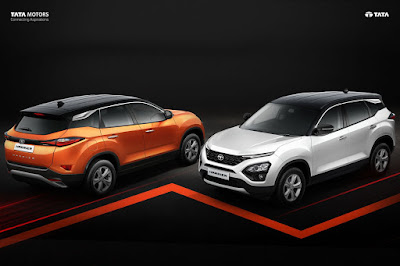 Tata Motors has announced that it has crossed 10,000 customers for its flagship SUV- Harrier since its launch in January 2019. As part of the celebrations, the company launched dual tone colour options on the Harrier.

The dual tone options will be available in two colours Calisto Copper and Orcus White on top-of-the-line XZ variant. The stunning black contrast roof will further enhance the appeal for Harrier, which is already appreciated for its unmistakable road presence. The Harrier range starts at 12.99 Lakhs and the dual tone options will be priced at 16.76 Lakhs ex-showroom Delhi

Commenting on the introduction of the dual tone options, Mr. Sibendra Barman – Vice President, Sales Marketing and Customer Support, Passenger Vehicle Business Unit (PVBU), Tata Motors said, “Harrier has made waves in the market ever since it was showcased in the Auto Expo 2018 as the H5X concept and subsequently launched in January 2019. Overwhelmed by the response received, we are extremely delighted to offer the Harrier in dual tone color options. This is in line with our continuous endeavor to excite and wow our customers with cars that deliver stunning design and exhilarating performance. With the launch of the dual-tone color options, we are confident that Harrier’s desirability will rise further to a whole new level.”

Harrier, built on the OMEGARC derived from Land Rover's legendary D8 platform, is the perfect combination of stunning design and performance. Powered by cutting-edge Kryotec 2.0 Diesel engine and Advanced Terrain Response Modes, Harrier assures an exhilarating performance on the toughest of terrains.

The Cubbon Park police, in a submission to the court, had argued that the accused Balambal was not a resident of Tamil Nadu and if given bail, might stop co-operating with the investigation. The police had expressed their doubts that she could abscond if granted bail.

Posted by editor-manu-sharma at 5:26 PM