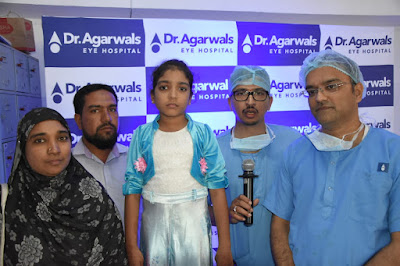 A nine-year old girl suffering from a rare condition called Congenital Superior Oblique Palsy, leading to a vertical squint and abnormal head posture to avoid double vision, was successfully treated at Dr Agarwal’s Eye Hospital in the city, bringing relief to the young patient, Hafsa Fatima, who was suffering from the problem since birth.

The spindle-shaped Superior Oblique muscle originates from near the nose and controls eye movements such as internal rotation (looking toward the nose), depression (looking downward), and abduction (looking away from the nose). Its weakness or paralysis (Palsy) gives rise to a vertical misalignment of the eyes.

Dr. Ravi, Medical Director, Senior Consultant, Cataract Oculoplasty said, “Patients avoid double vision by tilting their head, leading to an abnormal head posture. The condition in majority of cases is present from birth (congenital). It is a rare disorder with an incidence of 3.4 cases per 1,00,000 population.”

Said Dr. Muralidhara Krishna, Cataract & Paediatric Ophthalmology Specialist, Dr. Agarwal’s Eye Hospital, Bengaluru, who conducted the surgery: “Due to the disorder, Fatima had developed vertical squint and an abnormal, tilted-head posture with face turned to a side and depressed chin. This had opened her to ridicule from her peers due to her distorted appearance. Even going to school had become difficult. If Fatima was left untreated, her head posture would have worsened further and there would have been permanent changes in the muscle, making surgery difficult and unpredictable. Fatima’s surgery lasted 1 hour and 15 minutes as surgeons operated on three different muscles. The patient has now got rid of her vertical squint, her eyes are straight and properly aligned, and her abnormal head posture has almost vanished. She will now need regular follow ups once every 6 months, and treating the refractive error in her eyes.”

Said Dr. Raghu Nagaraju Senior Consultant, Cornea & Refractive Surgery, Dr Agarwal’s Hospital, Bengaluru: “Surgery on superior oblique muscle is very difficult technically and can cause bad diplopia (patient seeing two images of the same object) if not done expertly. That’s why many ophthalmologists simply refuse to do this surgery. As Fatima’s case shows, patients with such condition need not get disheartened because a solution is available in medical science, though it requires a meticulous examination of the eye and a challenging surgery.”

Added Dr. Muralidhara Krishna: “Congenital Superior Oblique Palsy in newborns may get unnoticed or untreated. Children may suffer severe double vision and vertical squint. They develop a head posture to decrease their double vision. If surgery is delayed, permanent fibrotic changes in muscle take place which make the condition even worse.”

The patient and her family are ecstatic since surgery. Said Fatima’s father: “We want to thank the doctors of Dr Agarwals Hospital from the bottom of our heart for the successfully surgery on Fatima. With this, our daughter has got her life back – she can now lead a normal life like any other child of her age. We still cannot believe it when we see her head and eyes perfectly straight and aligned normally.”
Posted by editor-manu-sharma at 7:59 PM